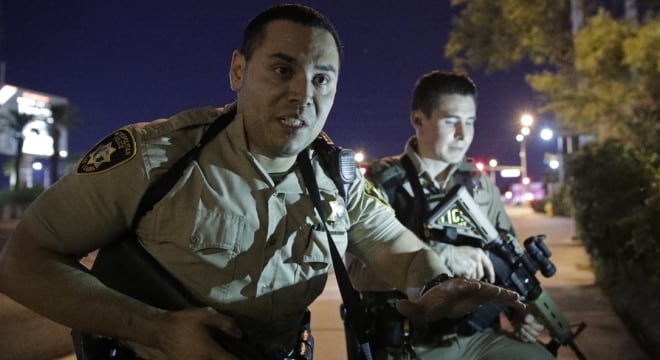 In this Oct. 1 file photo, police officers advise people to take cover near the scene of a shooting near the Mandalay Bay resort and casino on the Las Vegas Strip in Las Vegas. (Photo: John Locher/AP)

On Tuesday, a number of Second Amendment organizations responded to the push by Democrats for gun control following the mass shooting in Las Vegas.

While acknowledging the gravity of the situation — a murder that claimed 59 lives at the Route 91 Harvest country music festival — the groups repudiated the prospect that increased regulations on the transfer or possession of guns or ammunition would have averted the crime.

“If the gun grabbers want to control something they should control themselves and their mouths,” Alan Gottlieb, founder of the Second Amendment Foundation, told Guns.com. “This tragedy was unpreventable.”

According to authorities, the shooter, a 64-year-old retired accountant with no significant criminal record, painstakingly planned his crime and amassed a legal collection of guns and ammo for his deed beforehand, though a motive remains elusive.

“It’s not a reflection of the majority of gun owners in Nevada,” Don Turner, president of the Nevada Firearms Coalition, the state’s National Rifle Association affiliate, told Vice News in the immediate wake of the shooting. “In the emotion of the moment, there’s a tendency to push anti-gun agendas. We need to find out what really happened.”

However, Democrat lawmakers soon after the attack began to demand not only roadblocks to pending pro-gun legislation, but also a return to a national conversation on expanded background checks, bans on certain types of firearms, and other measures.

“Sadly, opportunistic politicians who prey on tragedies like this one have already begun to suggest that our response should be to abandon our constitutional principles in favor of policies that would ban more guns, disarm more victims, and further expand ‘gun free zones’ — spaces shielded by nothing more than invisible lines and wishful thinking,” said the California-based Firearms Policy Coalition in a statement sent to Guns.com on Tuesday.

“Such policies are not only irrational, but outright dangerous. As every attack in what was purported to be a ‘gun-free’, ‘bomb-free’, or ‘vehicle-free’ zone proves, there is no set of laws that will prevent evil people from monstrously plotting an effective means to harm others,” said the group.