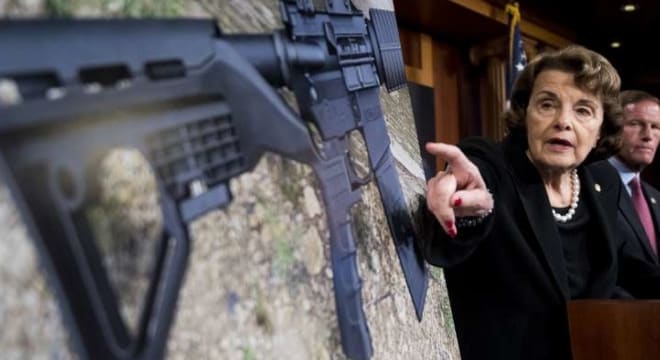 U.S. Sen. Dianne Feinstein, D-Calif, points to a photo of a bump stock during a news conference at the Capitol on Oct. 4, 2017. (Photo: Bill Clark/CQ Roll Call via AP Images)

Congressional lawmakers on Wednesday introduced bills to ban bump fire stocks and mandate smart gun use while other measures are in the works.

The move came as part of an emotional response by Democrats in both the House and Senate just three days after the Route 91 Harvest shooting in Las Vegas that left 58 dead and hundreds wounded.

The Automatic Gunfire Prevention Act, introduced in the Senate by U.S. Sen. Dianne Feinstein of California and in the House by U.S. Rep. David Cicilline of Rhode Island, aims to ban the manufacture, possession, transfer, sale, or importation of bump stocks or similar devices. Authorities earlier this week said the gunman in the Las Vegas shooting had several rifles fitted with such devices

“Automatic weapons have been illegal for more than 30 years, but there’s a loophole in the law that can be exploited to allow killers to fire at rates of between 400 and 800 rounds-per-minute,” said Feinstein. “The only reason to fire so many rounds so fast is to kill large numbers of people. No one should be able to easily and cheaply modify legal weapons into what are essentially machine guns.”

Starting at $100, the over-the-counter accessories rely on a rifle’s recoil to simulate full-auto fire without the need of a tax stamp due to National Firearms Act regulations on machine guns. As the devices still require the user’s finger to pull the trigger each time, they are generally unregulated. The proposal introduced this week would ban the devices as well as “trigger cranks” and any device, attachment, or accessory that accelerates the rate of fire of a semi-automatic rifle but falls short of the legal definition of a machine gun. This could potentially affect products like the Echo Trigger and Hell Fire Trigger.

Although bump fire devices are reportedly already prohibited in California, the editorial board of the San Francisco Chronicle called a nationwide ban “a start on gun laws.”

Meanwhile, swamped with an influx of new orders, bump fire stock maker Slide Fire has stopped taking new orders “in order to provide the best service with those already placed.”

“Ultimately, when Congress… looks at this, they’ll start asking questions about why anybody needs this, and I think the answer is we have a Bill of Rights and not a Bill of Needs,” Erich Pratt, executive director of Gun Owners of America, told the AP.

In addition to the Automatic Gunfire Prevention Act, U.S. Sen. Ed Markey, D-Mass, reintroduced The Handgun Trigger Safety Act which pushes “smart guns” by ordering within five years that all newly manufactured handguns include technology enabling only authorized users to fire the pistol. Existing handguns would have to be retrofitted within 10 years.

The lawmaker argues a mandate to only sell guns so enabled with lock-out features would save lives.

“To anyone who says that taking action now to address gun safety is ‘too soon’, it’s already too late for at least 59 people in Las Vegas,” said Markey. “We need to pass commonsense gun legislation that keeps these weapons out of the hands of people who should not have them.”

The bill would authorize grants to develop the technology and mandate that, within five years of adoption, all new handguns made in the country would be personalized, and that within 10 years all pistols offered for sale would have to be retrofitted with the technology. Manufacturers would be able to defray the cost of retrofitting by applying for grants from the Department of Justice.

Firearms trade groups argue they do not oppose research and development of “authorized user recognition” technology being applied to a firearm but do object to legislative mandates such as Markey’s bill and others introduced in the past.

Similar measures were proposed in both 2014 and 2015 but never left committee.

Fresh off a Washington Post op-ed and an impassioned speech on the Senate floor, U.S. Sen Chris Murphy, D-Conn., told reporters earlier this week he is working on a measure to expand background checks to cover all gun transfers.

Last summer, Murphy mounted a 14-hour filibuster during the discussion of an unrelated spending bill just days after the Orlando Pulse nightclub shooting, only yielding when promised he would get a floor vote on his universal background check bill. The measure failed 44-56, picking up fewer votes than the similar Manchin-Toomey bill in 2013 which came after the Sandy Hook shooting in Newtown.

While some Republicans are in favor of a ban on bump stocks, others in the GOP caution the likelihood of gaining bipartisan support on new gun control measures in a legislature they control is slim.

“It doesn’t matter whether it’s legislation that you might be asking me about or anything else,” U.S. Sen. Chuck Grassley, R-Iowa, told local reporters Wednesday “As we’re developing legislation, you’ve got to develop the legislation so you can get 60 votes.”

Meanwhile, state-level bans on some semi-auto firearms and their magazines have been proposed this week in Florida and Washington.