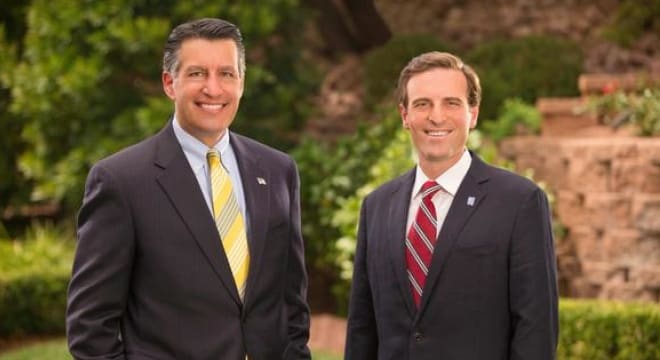 The measure won by a thin margin at the polls last November but was suspended by Nevada Attorney General Adam Laxalt over concerns on how it would be applied. Now, Sandoval has asked Laxalt’s office to take another look at the law, the Las Vegas Review-Journal reported.

Laxalt pumped the brakes on the measure after receiving a letter from the Federal Bureau of Investigation explaining the state’s private party background checks are in the purview of Nevada’s own resources as one of the 13 “point of contact” states that conduct their own checks through a central repository. With the federal government declining to process the expanded checks directly, and the Nevada Department of Public Safety neither authorized nor funded by the ballot measure’s language to run the checks, Laxalt contends the law is unenforceable.

With backers of the measure threatening a lawsuit, Sandoval has asked Laxalt to explore the bifurcated approach that would let the FBI handle person-to-person checks and the state others, The Nevada Independent reported. This “partial point-of-contact” concept would split responsibility for background checks between the Nevada and the feds.

Everytown President John Feinblatt argues Sandoval should direct state officials to immediately work with the FBI to implement the law, pointing out that nine other states already operate as partial point-of-contact states

“It is unconscionable that, after months of refusing to enforce the will of the people, the Governor is now passing the buck,” Feinblatt said in a statement. “He doesn’t need another opinion from the attorney general—particularly not the same attorney general who starred in the NRA’s ads opposing this law.”

The referendum backed by gun control advocates, Question 1, failed in 16 of the state’s 17 counties with only voters in Clark County approving the measure, in the end passing by around 10,000 votes. The initiative was funded by a $19.7 million campaign fueled in large part by former New York Mayor Michael Bloomberg.