9 months probation for officer who fired 41 shots at unarmed man, killing him 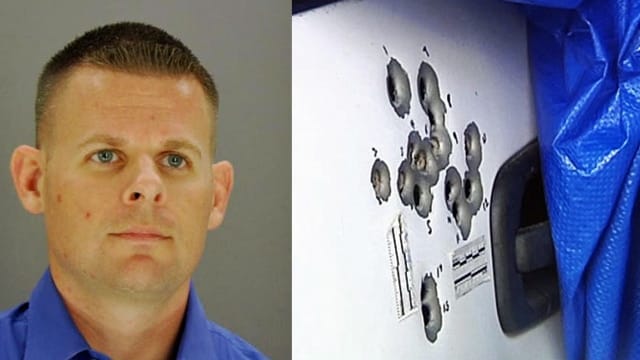 Fellow officers testified they were more frightened of Garland Police officer Patrick Tuter than of the man he shot and killed. (Photo: Dallas County Jail)

A former Texas police officer received nine months of probation for killing an unarmed man after a police chase in 2012.

Patrick Wayne Tuter, 37, pleaded no contest Monday to a misdemeanor count of discharging a firearm, according to the Dallas Morning News.

The incident began when Tuter spotted a white pickup truck just after midnight on Aug. 31, 2012. The truck had been involved in a police chase just two days earlier. When the driver, 25-year-old Michael Vincent Allen, made an evasive turn at a red light, the chase began. They reached speeds of 100 miles an hour before stopping in a cul-de-sac.

Fellow officers testified at the officer’s trial last year that they were more frightened of Tuter than of the man he shot and killed. Authorities say he fired 41 shots at Allen, reloading his gun at least twice. Three of the rounds hit Allen, killing him.

Prosecutors called Tuter a rogue cop who “acted recklessly” when he opened fire in a neighborhood. He was the only officer to open fire during the ordeal. One officer on the scene later testified that he thought there was an active gun battle happening, when, in fact, Tuter was the only person shooting.

Officer William Norris testified that it was the closest he’d come to being shot. He said he was close to the action, and the suspect had his hands on the steering wheel. He said he didn’t fear for his life until Tuter opened fire.

Defense attorneys argued that Tuter feared for his life because he saw Allen reach down for something in the vehicle. Detectives later found meth and a pipe in Allen’s truck.

In the end, the jury couldn’t agree on a verdict, and it ended in a mistrial. A retrial was set for this week. Tuter was fired from the Garland Police Department in 2013.