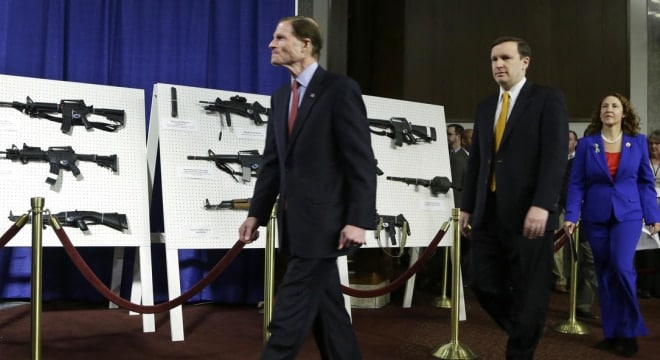 Democrats on Capitol Hill announced a proposal on Thursday with the help of gun control groups that would repeal the Protection of Lawful Commerce in Arms Act.

The measure, to be introduced in the Senate by Connecticut lawmakers Richard Blumenthal and Chris Murphy and in the House by California Rep. Adam Schiff and Connecticut Rep. Elizabeth Esty, would strip away the decade-old safeguard passed by Congress that insulates the gun industry from frivolous lawsuits.

“Making the gun industry immune from lawsuits effectively handed them a license to kill,” said Murphy in a statement. “Toy manufacturers are held legally responsible if their neglect or irresponsibility hurts people, so why on earth aren’t gun manufacturers?”

In October 2005, President George W. Bush signed PLCAA after it had passed through Congress by better than a 2-to-1 margin. The act prohibits both lawful firearms manufacturers and dealers from being held liable for negligence when crimes have been committed with their products. Democrats have repeatedly attempted to roll back the protection for several years with little result. An identical measure filed last year by the same set of lawmakers failed to move out of committee.

Gun control groups contend PLCAA is a sweetheart deal that costs lives. “More than 300,000 Americans have been killed with guns since Congress passed the Protection of Lawful Commerce in Arms Act,” said Elizabeth Avore, legal and policy director at Everytown, in a statement issued through Esty’s office. “The Equal Access to Justice for Victims of Gun Violence Act would right that wrong and make the gun industry play by the same rules as every other American business.”

Gun industry trade groups argue the protections are needed to protect against junk lawsuits designed to run licensed gun makers and dealers out of business while it still allows for legitimate liability claims such as in cases of defective products.

“The PLCAA exists because the Brady Center, greedy trial lawyers, and big city mayors got together in the late 1990’s to circumvent Congress and impose gun control regulation through litigation through settlements or bankrupt the industry with massive judgment,” Lawrence Keane, senior vice president and general counsel of the National Shooting Sports Foundation, told Guns.com previously.