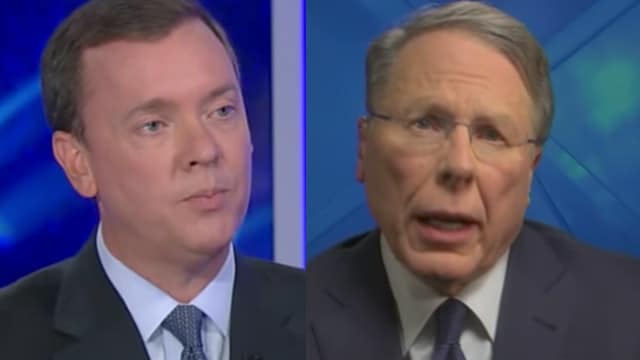 The National Rifle Association’s leadership appeared on Fox News talk shows on Thursday night to reiterate points made in their statement calling for federal regulators to review gun accessories that allow semi-auto firearms to perform like full-auto firearms.

Both NRA lobbying director Chris Cox and executive director Wayne LaPierre stressed that they did not advise for legislation banning such devices, called bump stocks, but rather requested the Bureau of Alcohol, Tobacco, Firearms and Explosives to determine whether or not they comply with federal law.

“What we’ve said is ATF needs to do their job. ATF needs to look and if there’s technology that’s come to the market that allow for a semi-automatic rifle to function as a fully-automatic rifle, they need to be regulated differently,” Cox told host Tucker Carlson. “We didn’t talk about banning anything. We talked about ATF going back and reviewing whether or not these are in compliance with federal law.”

“The Obama Administration a couple years ago approves this device called a ‘bump stock’ — if you take a look at it, I mean, any look at it, it takes a semi-automatic firearm and makes it perform like a fully-automatic firearm. It makes it function like one. And what the NRA has said is we aught to take a look at that, see if it’s in compliance with federal law and if it’s worthy of additional regulation,” LaPierre said.

On social media, the public — presumably NRA members — responded with results just as polarizing as the gun debate itself, with some thanking the organization for a measured, political response while others characterized it as the gun lobby caving to pressure. Yet, another layer to the conversation is some see the only purpose of a bump fire stock is to circumvent federal laws that regulate machine guns.

ATF determined at least twice since 2010 the bump fire design did not violate the National Firearms Act because the user still needs to depress the trigger every time he or she wants to fire a shot. In other words, the device does not change the mechanics of a gun to allow a shooter to fire multiple shots by holding down the trigger.

Pro-gun groups also had mixed views, but most said they would oppose any proposal to ban bump fire stocks. Gun Owners of America tweeted to Hannity that “GOA has a different perspective on bump stocks than other groups,” and released a statement opposing any such measure. The California-based Firearm Policy Coalition said gun accessories are protected by the Second Amendment much like an iPhone is covered by the First Amendment. However, the Second Amendment Foundation said it would “support a productive dialogue concerning “bump stocks.”

Political opponents also criticized the NRA’s response, suggesting the organization should support a measure to ban bump fire stocks. “The gun lobby has for years boosted devices that effectively convert rifles into machine guns and boasted that you can get away with guns that mimic fully-automatic fire, so it’s hardly a surprise that they’re calling for a review of bump stocks by a friendly regulatory agency rather than legislation from Congress,” said John Feinblatt, Everytown president.

The NRA released the statement after Republican leaders in both the House and Senate offered to join Democrats to support legislation to ban bump stocks or an openness to hear such measures. However, it’s unclear what exactly the legislation would say.

U.S. Sen. Diane Feinstein, a Democrat who has proposed major gun control bills in recent history, proposed a measure to ban bump stocks this week. She said it would update federal law to close loopholes. “Legislation would make crystal clear that Congress is banning all devices that allow a weapon to achieve an automatic rate of fire, regardless of how a weapon is altered,” she said in a statement.

Bump stocks were thrust into public forum after a gunman equipped the item to a dozen or so guns and opened fire into a crowd, killing 58 and injuring almost 500 in Las Vegas on Sunday.