Vegas gunman’s brother wants to raise $1M for the victims 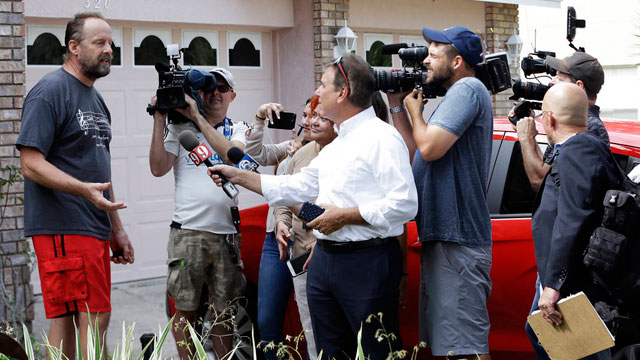 Eric Paddock, left, the younger brother of the Las Vegas gunman, speaks with reporters outside of his home in Orlando. (Photo: AP)

The younger brother of the gunman who opened fire on a country music festival in Las Vegas Sunday night has offered a national news organization an inclusive interview in exchange for $1 million. But Eric Paddock isn’t looking to get rich. He wants the funds donated to the victims of the shooting.

Paddock, who lives in Orlando, said he realizes most news organizations don’t pay for such interviews – and certainly not at such a high price – but he is hoping that someone will seize the opportunity for him to speak exclusively about his brother’s life, while giving him a chance to give back to the victims.

Paddock previously said there was no indication his brother was capable of such violence, but the rampage left 59 dead and nearly 500 injured when he opened fire on some 22,000 concert-goers from the 32nd floor window of his room at the Mandalay Bay.