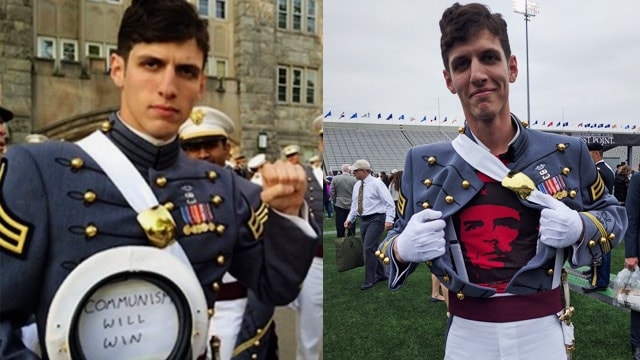 2nd. Lt. Spenser Rapone is under investigation after photos surfaced of him showing support for communism while in uniform. (Photo: Twitter)

Florida Sen. Marco Rubio wants officials at West Point to revoke the commission of an officer who tweeted photos of himself with pro-communist messages while in uniform.

Rubio wrote to acting Army Secretary Ryan McCarthy this week, calling the images an “extreme embarrassment” for the U.S. military, according to the Military Times.

“It is extremely concerning that someone who so often expressed such hostile views towards the United States’ system of government was able to obtain a commission,” he wrote. “(His) revolutionary ideas were harbored long before he was commissioned as an Army second lieutenant. Were West Point administrators or faculty aware of his views and behavior?”

In one photo, 2nd Lt. Spenser Rapone is seen wearing a Che Guevara shirt under his uniform. In another photo, he reveals that the words “communism will win” are written under his hat. The photos were taken at his graduation in May 2016.

Rapone is currently serving in the field with 2nd Brigade Combat Team, 10th Mountain Division. The division has opened an investigation in to his political activities.

“As figures of public trust, members of the military must exhibit exemplary conduct and are prohibited from engaging in certain expressions of political speech in uniform,” said Army spokeswoman Lt. Col. Tonya Stokes.

In 2011, Rapone was deployed to Afghanistan with 1st Battalion, 75th Ranger Regiment, but was later “removed for standards” from the regiment. That’s when he headed off to West Point.

He’s been awarded with the Good Conduct Medal, the Global War on Terrorism Service Medal, an Army Achievement Medal, the Afghanistan Campaign Medal with a single campaign star, and the Combat Infantryman Badge.

He posted the photos to Twitter a couple weekends ago in support of NFL sideline protests of the national anthem. “In case there was any lingering doubt, hasta la victoria siempre,” Rapone wrote in one post.

“Second Lieutenant Rapone‘s actions in no way reflect the values of the U.S. Military Academy or the U.S. Army,” a statement said after the photos were published.

Rubio this week wrote that “posts on social media by Rapone broadcast his devotion to the communist cause and his plans to infiltrate and sabotage the military.”

“His conduct, writings, and sympathies for American adversaries predates his commission in the Army,” Rubio said. “Therefore, I respectfully request the United States Army immediately nullify Rapone’s commission and pursue all available disciplinary options under the Uniform Code of Military Justice. Rapone should be required to pay back in full the cost of his education, and the United States Military Academy should consider revoking his degree.”

Rubio also wants West Point to provide relevant information on West Point’s efforts to “ensure cadets who actively support the destruction of our government do not waste more taxpayer funds or prevent a more worthy candidate from attending.”