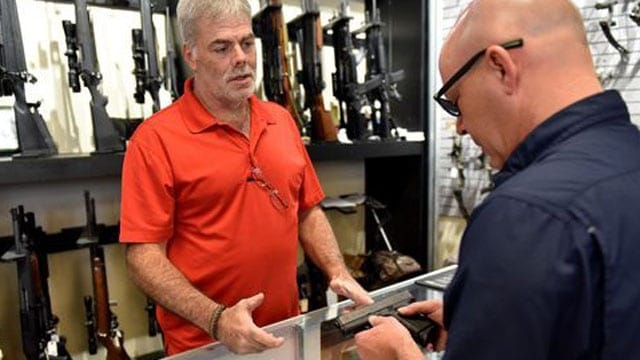 In this file photo, Randy Crocker , left, with USA Pawn, shows Hal Finch of Madison a pistol in the store on I-55 at McDowell Road in Jackson, Mississippi. Gun sales fell marginally in September — the same month Mississippi hosts a reduced sales tax holiday on guns and ammo.  (Photo: The Clarion-Ledger)

Estimated sales fell just short of 940,000 last month — a 13 percent decrease over 2016, the biggest on record for gun sales. Month over month, however, sales appear relatively flat, with September trailing August by just over 10,000 transfers.

Dealers processed checks for more 478,000 handguns and 417,000 long guns, according to federal data.

Its been a “difficult” summer for gun makers and retailers still standing in the shadow of 2016. Since the November election, stocks for Smith & Wesson and Sturm, Ruger and Co. fell 50 percent and 26 percent, respectively. Both companies blame weak demand, with Smith & Wesson’s CEO predicting as much as a 17 percent decline in annual profits through 2018. Ruger’s second quarter net sales dropped 22 percent and its quarterly earnings fell by almost half compared to 2016.