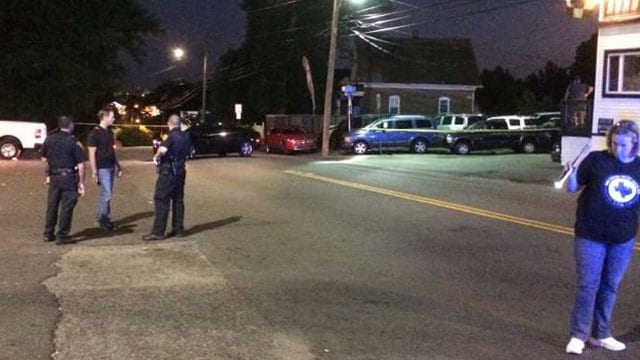 A witness talks with police after an attempted robbery turned into a double shooting. (Photo: Connecticut Post)

A man from Bridgeport, Connecticut, is facing prison time for shooting a woman last year who first shot him during an attempted robbery which police say occurred during a drug deal gone bad.

Jarfari “Cutty” Buggs, 28, who was shot in the stomach during the Aug. 29, 2016, incident, pleaded guilty in Superior Court Wednesday to first-degree assault and criminal possession of a firearm, according to reports from the Connecticut Post. If convicted, he could spend up to three years in prison.

The woman who was shot by Buggs, 25-year-old Vaneccia “Nucci” Manson, survived her injuries and has since been convicted of attempted murder, assault and robbery. She was sentenced to six years in prison. His sentencing is scheduled for Dec. 8.

Bridgeport Police Chief Armando Perez said Manson, who is known to local authorities, and another woman set up Buggs, a known drug dealer, in an attempt to rob him. However, the robbery did not unfold as planned, and both Buggs and Manson were shot with the same gun.

Perez said the three met up in the parking lot of a local business around 7:30 p.m., but instead of buying drugs, Manson pulled a gun on Buggs, who, in turn, struggled with Manson. Buggs was shot in the abdomen during the struggle, but was then able to gain control of the gun. An injured Buggs then pursued Manson and fired multiple rounds until she collapsed on the ground.

The encounter was witnessed by numerous shoppers and also captured on surveillance video from a nearby deli.

Buggs fled from the scene before police arrived, and drove himself to a local hospital for treatment. Manson, who was shot in the head and believed she was going to die, admitted to Police Capt. Brian Fitzgerald on the scene that she tried to rob Buggs before she was shot.