The Heritage Foundation, a conservative think tank based in Washington D.C., released its annual ‘Index of Military Strength.’ The 432-page report says the U.S. military would struggle to fight in two major regional conflicts at the same time.

The Heritage Foundation assessed the capability, capacity, and readiness of military power on a scale ranging from very weak, to weak, marginal, strong, and very strong. The Navy, Air Force and U.S. nuclear capabilities were rated as marginal, whereas the Army and Marine Corps were rated as weak.

The report says the Army is too small for the tasks it’s assigned, and its equipment continues to age. The Marine Corps is facing increased stress and poor aviation readiness, according to the report, factors that made it the only military service to drop from ‘marginal’ last year to ‘weak’ this year.

“The common theme across the services and the U.S. nuclear enterprise is one of force degradation resulting from many years of underinvestment, poor execution of modernization programs, and the negative effects of budget sequestration (cuts in funding) on readiness and capacity,” says a summary of the report.

Funding is a big part of the problem, the report says. In the 1990’s, defense spending started to dwindle. Then, following the Sept. 11 terror attacks and subsequent wars in Afghanistan and Iraq, spending skyrocketed, before a defense spending slowdown started under President Obama. 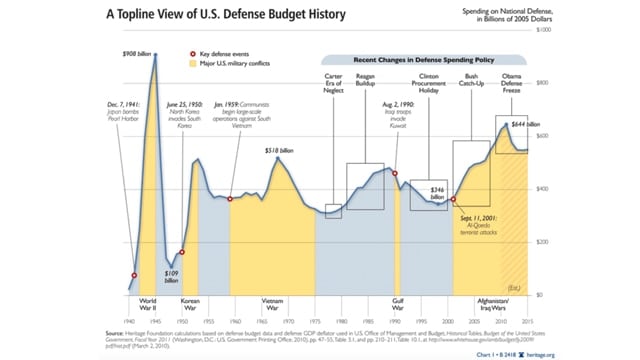 “We cut defense budget between 2010 and 2014 by 22 percent, and we’re still 18 percent lower in defense spending than we were in 2010,” said Thomas Spoehr, the director of the Center for National Defense at the Heritage Foundation. “Now what’s happened in the world in those intervening years? Obviously the world has grown many times more dangerous.”

Defense Secretary James Mattis agrees. Earlier this year, he said the 2011 Budget Control Act, which puts caps on defense spending, together with sequestration, has “done more damage to our readiness than the enemies in the field.”

“Without a real commitment to increases in modernization, capacity, and readiness accounts over the next few years, America’s military branches will continue to be strained to meet the missions they are called upon to fulfill,” concludes the Heritage Foundation index.

Those who want more funding may get their way. More than 150 House Republicans this week announced their support for President Trump’s call for a $700 billion defense budget, a $60 billion increase from his original proposal.

“Restoring our military strength and defending the country is as important to America’s success as reforming the tax code, ensuring healthcare for Americans and growing the economy,” the lawmakers wrote.