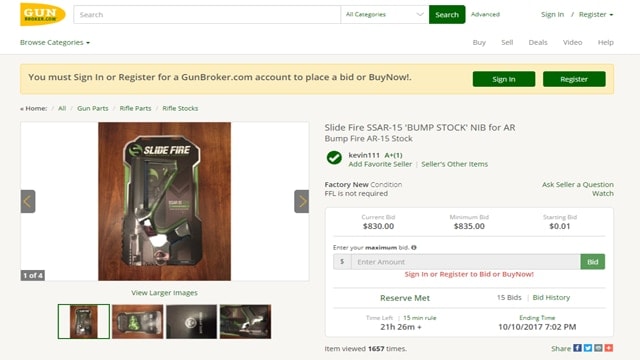 Online bids for bump stocks — a gun modification virtually sold out at retailers across the country — skyrocketed to more than $800 over the weekend.

Two separate auctions on Gun Broker feature Slide Fire bump stocks for $830 and $755, respectively. Half a dozen users placed bids on the cheaper, left-handed version while the more expensive listing attracted 15 bids as of Sunday.

Bump stocks, legal devices that mimic automatic gunfire, made headlines last week after the Bureau of Alcohol, Tobacco, Firearms and Explosives confirmed 12 of the modifiers were found in 64-year-old Stephen Paddock’s two-room suite on the 32nd floor of Mandalay Bay and Casino. Paddock perpetrated the deadliest mass shooting in American history Oct.1 when he fired into a crowded country music festival from the windows of his hotel room, killing 58 and wounding 489 others.

Typically retailing for as little $99, major retailers — including WalMart and Cabela’s — pulled the devices from shelves in the days after the shooting. SlideFire Solutions, a Texas-based bump stock manufacturer, temporarily halted new orders. Requests for comment from all three companies went unanswered last week.

The devices face an uncertain future as congressional Republicans express a willingness to reexamine current federal regulations for bump stocks — a sentiment echoed, in part, by the National Rifle Association last week.

“What we know is Stephen Paddock is a man who spent decades acquiring weapons and ammo and living a secret life, much of which will never be fully understood,” Clark County Sheriff Joe Lombardo said during a press conference last week. “He meticulously planned on the worst domestic attack in United States history.”