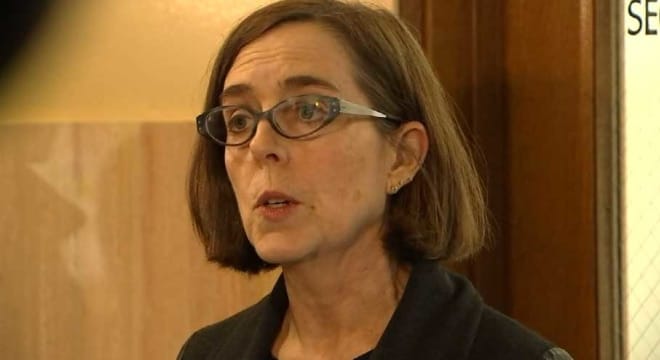 Citing the Las Vegas shooting and the two-year anniversary of the mass shooting at Umpqua Community College, Oregon’s governor on Friday announced plans to close a pair of what she describes as “loopholes” in state law.

Specifically, Brown said she would be working with Oregon lawmakers to develop legislation to close the so-called Charleston and Boyfriend Loopholes.

“We, as lawmakers, must put politics aside and work together to keep our communities safe,” Brown said. “I look forward to working with the Legislature to finish what we started last session and close the Charleston and Boyfriend Loopholes for good. These policies will keep guns out of the wrong hands and help keep our promise to families across the state to keep our communities safe.”

The Charleston loophole is a reference to the way in which a white supremacist, despite having a prohibiting mark on his record, obtained the handgun he would later use to murder nine black parishioners at a church in Charleston, South Carolina. Under Brown’s proposals, the Oregon State Police would delay a firearm transfer until they determine the person receiving it is eligible to possess the gun. Current federal law allows licensed dealers to proceed with delays after three days without a determination.

The Boyfriend loophole is a reference to Oregon’s current definition of a domestic abuser. Brown’s measure would update the definition to include those not married and add persons convicted of misdemeanor stalking to those barred from possessing firearms.

Brown has broached the concept of closing both loopholes as part of her legislative agenda in recent years.

Brown, who was backed by an anti-gun billionaire philanthropist in her election bid, has a track record of signing gun restrictions into law. Last month, she signed a controversial bill to establish Extreme Risk Protection Orders in the state, forcing subjects deemed at risk by a judge to surrender their firearms. In 2015, she signed legislation to expand background checks in the state to include most gun transfers.

The Oregon chapter of Moms Demand Action applauded Brown’s latest announcement and thanked her on social media for “being a gun violence prevention champion.”

“The governor is being incredibly politically opportunistic as she heads up to re-election,” Larson told KATU. “They say this is a terrible loophole. It causes all kinds of problems. Well, tell me where they are other than Charleston because in most cases the gun stores I do business with are not gonna sell you a gun without an approval. … Laws don’t stop lawbreaking people from doing things.