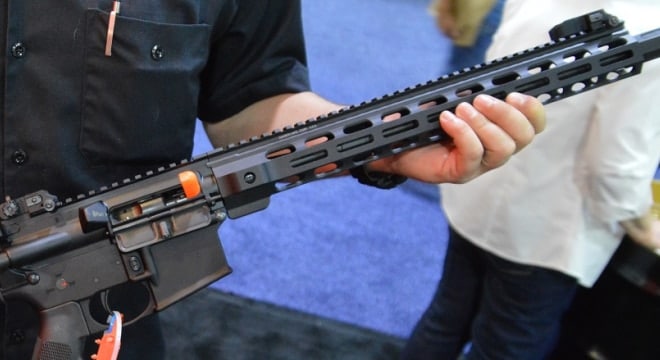 While bump stocks are ostensibly the main dish, some state lawmakers are adding other restrictions on semi-auto firearms and their magazines to the menu in upcoming ban legislation. (Photo: Chris Eger/Guns.com)

Bills filed in two states after the tragic mass shooting in Las Vegas go after bump fire stocks but also target other guns and their magazines.

In Illinois, the proposal would also forbid guns defined as “assault weapons” and those chambered in .50 caliber while a Massachusetts bill would include currently legal magazines that hold more than 10 rounds of ammunition.

“These devices were created by gun manufacturers as a workaround of the federal law banning the sale and possession of automatic weapons, and there is absolutely no reason for any citizen to possess a ‘bump stock’ device or a ‘high-capacity magazine,” said  Massachusetts Rep. David Linsky, D-Natick.

While Massachusetts has long-maintained a ban on guns classified by the state as assault weapons and magazines capable of holding over 10 cartridges, mags made before the ban have been grandfathered and can still be legally owned. Besides adding a prohibition to bump fire magazines to the Commonwealth’s laws, Linsky’s bill would strip away the protection for grandfathered magazines.

In Illinois, state Rep. Marty Moylan, D-Des Plaines, wants to ban the newly-controversial bump stock attachments, but the language of his proposal goes on to add assault weapons, .50-caliber firearms, and large capacity magazines to the prohibition as well. While some areas, such as Cook County and Highland Park have their own local bans, the Land of Lincoln as a whole does not generally limit semi-auto firearms. Moylan wants this changed.

“I’m very strong on how I feel of trying to present this bill and getting enough votes to get it passed. Individuals that are going to take an opposite view of this, I will bring up all of the details of why I think it’s important and why we have to protect lives,” Moylan said. “The hunters that I know and talk to don’t need an AK-47-type weapon to go hunting.”

Gun rights groups, to include the Gun Owners’ Action League of Massachusetts and the Illinois State Rifle Association oppose the pending legislation.

“This bill is simply a flat-out attack on our civil rights and does not offer any path to lawful ownership,” said GOAL of Linsky’s proposal while ISRA Executive Director, Richard Pearson offered that “Marty Moylan has an obsessive hatred of firearms and the people who own them.”

Both states have Republican governors though Massachusetts Gov. Charlie Baker last week said he would sign anti-bump stock legislation “tomorrow” if it was presented to him.