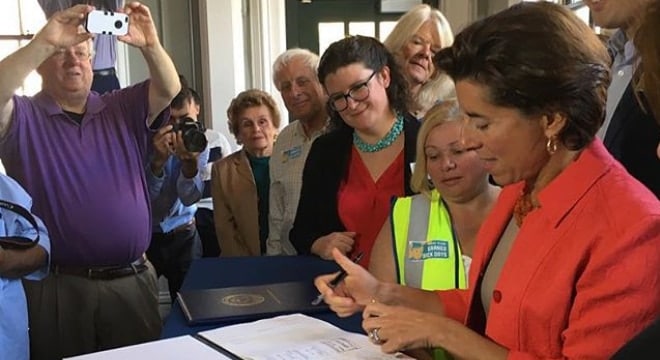 The Rhode Island Families Act, which overwhelmingly passed the Democrat-controlled General Assembly as HB 5510, was signed into law by Raimondo last Wednesday. Championed by gun control advocates during its run through the legislature, prohibits gun possession by those subject to restraining orders as well as those convicted of misdemeanor cyberstalking and domestic violence.

“While no one got everything they would like, I will say that everyone agreed that victims of domestic violence should not have to live under legitimate fear for their lives, and we’ve cooperated to come up with a bill that greatly improves their protection while addressing Second Amendment concerns,” said state Sen. Harold Metts, D-Providence, who shepherded the bill through the Senate.

The 17-pages of modifications to state law bars gun possession by abusers convicted of misdemeanor domestic violence crimes – including cyberstalking and cyberharassment – and those subject to court-issued protective orders, requiring them to turn their firearms over to police or a licensed gun dealer within 24 hours of conviction or being served with a restraining order.

Those prohibited from possession under the statute could later transfer their guns to a third party so long as they are not a relative or live in the same home. In some cases, such as when a protective order is lifted or expired, the former gun owner can seek their guns return through the courts.