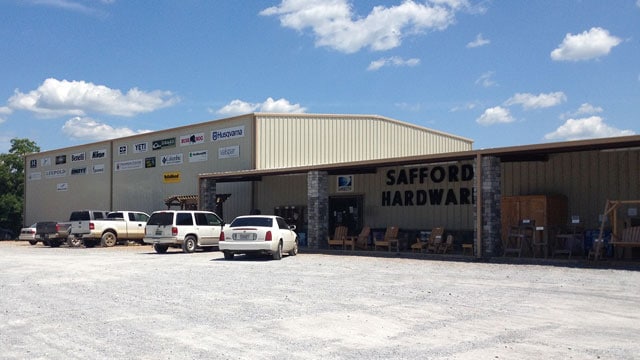 Safford Tire and Hardware was targeted for a break-in earlier this year in which the suspects stole 50 firearms. (Photo: Pinterest)

A federal court sentenced two men who stole more than 50 guns from an Alabama gun dealer earlier this year, the Justice Department announced.

The court sentenced Jabriel Bell, 25, to 46 months in federal prison and Fortune Hoppins, 35, to 57 months in addition to three years of supervised release, and a third suspect, Stanley Young, 28, will be sentenced in December. The three men pleaded guilty to stealing firearms from a licensed dealer over the summer.

According to court documents, in the early morning hours before the Safford shop opened on May 10, the trio pried open a metal door, then broke an interior door window to gain access to the guns, all of which was captured on surveillance video, which later proved instrumental in identifying and finding the suspects.

“[The video] showed two subjects forcing their way into the business. They were calm, real calm, real collected, not in too big of a hurry,” Capt. Mike Granthum, of the Dallas County Sheriff’s Department, told The Selma Times-Journal. “It shows them rambling through the guns basically picking what they wanted, putting them in bags and gracefully, for a lack of better terms, walking out of the store.”

Law enforcement recognized the suspects in surveillance video. Bell was found the day after the break-in and admitted to participating in the crime with Hoppins and Young. Bell also helped authorities locate nearly half of the stolen guns, which were in a bag that was tossed in a nearby wooded area. Later that same day, law enforcement located Hoppins, who was still in possession of one of the stolen guns. Young, who was found in New York, wasn’t located until about a month after the break-in.

At the time of their arrest for the gun shop burglary, all three had outstanding warrants stemming from an armed bank robbery in Marion. They were all out on bond for the bank robbery when the guns were stolen. However, none of the defendants have yet to go to trial for those charges.