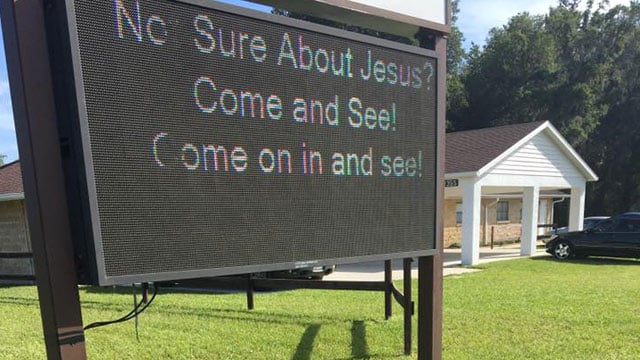 Church members were invited to next year’s event, but the invitation was not well-received. (Photo: Facebook)

The pastor at a church in Belleview, Florida, made a reference to the Las Vegas shooting during his Sunday morning sermon when a volley of gunfire rang out, sending church members scrambling for safety. But as it turned out, the sound of gunfire came from a World War II re-enactment happening about a mile from the church.

“It was crazy,” said Pastor David Creek, of Belleview Church of Christ.

Creek said there were about 50 church members attending the service, and “everyone thought it was going down.” Creek said it was the scariest moment of his life, and called it “horrific judgment” to have such an event in the wake of the Las Vegas shooting.

However, David Thomas, president of the First Florida chapter of the Military Vehicle Preservation Association, said they’ve been doing the annual re-enactments for more than a decade, with the events typically planned a year in advance. Thomas confirmed the event, which aims to teach youth about history outside of a museum setting, was previously announced to both law enforcement and local media, but also admitted that he could see how the blank fire from .50- and .30-caliber machine guns could startle some.

Nonetheless, Thomas invited the church congregation to attend the event next year to see first-hand what it’s all about, but Creek suggested they “re-enact love” instead.