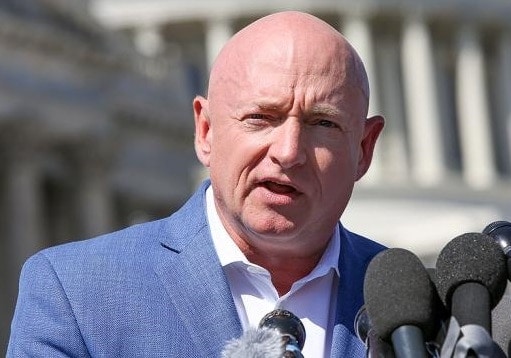 Kelly, a retired astronaut, husband of former Rep. Gabby Giffords and co-founder of gun control group Americans for Responsible Solutions, spoke on the issue during an Off Message podcast interview with Politico’s Edward-Isaac Dovere.

“I think if you’re a member of Congress and you fundamentally believe laws don’t work, you should quit,” Kelly told Dovere. “I mean, you really should. You’re in the wrong job. And that goes for anything, including this issue.”

While Kelly repeatedly expressed his frustration, he said he also sees a glimmer of hope with the proposals to ban bump stocks, devices that allow semi-automatic rifles to simulate full-auto fire. Gunman Stephen Paddock had fashioned bump stocks to a number of rifles he used to kill 58 people and injure almost 500 others in Las Vegas earlier this month.

Those proposals have gained bipartisan support over the past week, and even the National Rifle Association came out and said ATF officials should conduct a review of the devices, though the group stopped short of supporting an outright ban.

“They are acknowledging that legislation matters. A lot of these folks have been saying it doesn’t matter, it will never matter,” Kelly said. “They have just turned that argument upside down. And that’s a good thing. You know, maybe people have to be educated, right?”

Kelly also added he thought the Las Vegas shooting should be treated as an act of domestic terrorism, an attack he said was only exacerbated by lawmakers’ refusal to pass meaningful gun regulations.

“Usually, you think terrorism, it’s got to be political or religious or some group—I’m convinced that when a guy goes to the window of a casino and tries to murder a massive number of people—he wasn’t trying to kill 50 people; he was trying to kill 500 people,” he said. “I think the message he is sending is, ‘Hey! I am capable and willing, and I’m going to go out and do this, and I’m going to kill a bunch of people all at once.’ And to me, that is political here in the United States.”

While Kelly and other groups have argued gun control legislation could have a significant impact on violent crime in the country, the National Rifle Association remained firm in their stance that more restrictions would only make things harder for law-abiding gun owners. NRA chief executive Wayne LaPierre said Sunday that U.S. citizens would be safer if gun rights were expanded and local regulations overturned.

Democrat Dianne Feinstein, California’s senior U.S. Senator and main sponsor of the proposed bump stock ban, also discussed the issue on Sunday and gave a straightforward response when asked if any law passed could have stopped the Las Vegas gunman.

“No,” Feinstein said. “He passed background checks registering for handguns and other weapons on multiple occasions.”