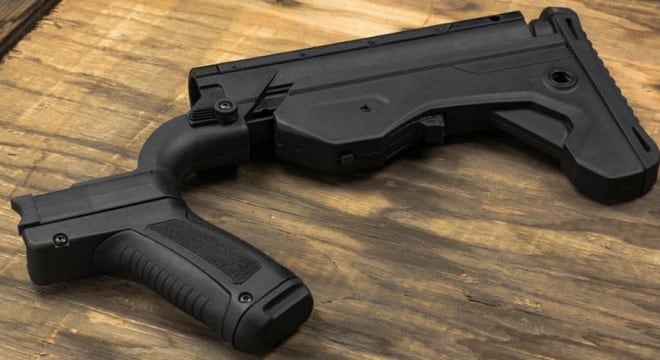 Slide Fire, based in Moran, Texas, patented their stocks in 2000 and since then has defended their niche in the marketplace (Photo: Slide Fire)

Seeking punitive damages, the Brady Center joined with survivors of the Route 91 Harvest shooting in filing a class action lawsuit against Slide Fire.

The suit names Slide Fire Solutions, who holds itself as the “sole patent holder of bump fire technology” with numerous patents registered, as the plaintiff along with yet-to-be-named retailers that sold the devices, a dozen of which were believed fitted to rifles used by Stephen Paddock to kill 58 and injure hundreds in Las Vegas earlier this month.

The suit, filed on behalf of three festival attendees in a Nevada District Court, claims Slide Fire negligently sold an unreasonably dangerous product, which created a public nuisance, asking the court to order the company to foot the bill for victims’ counseling and other treatments and pay punitive damages.

“The people who attended the concert have suffered so much already,” said Kristin Brown and Avery Gardiner, co-presidents of the Brady Campaign in a statement. “The physical injuries are staggering, and we know the emotional injuries can be equally severe and long-term.”

In their 30-page complaint, the group argues that, despite Slide Fire’s contention the stocks were designed to help those with limited mobility to enjoy their Second Amendment rights, there is no real use for bump fire stocks. Further, they state that “Paddock could not have injured so many people without a bump stock” and may not have launched his “military-style assault” without access to them.

“Because of this device, 59 people died, hundreds were severely injured, in mere minutes, and thousands more sustained emotional distress, making this the worst mass shooting in American history,” says the filing, penned by Eglet Prince, a personal injury law firm in Las Vegas.

Slide Fire, based in Moran, Texas, patented their stocks in 2000 and since then has defended their niche in the marketplace, forcing competitor Bump Fire Systems out of business last year after a lengthy court battle. Since the news broke of the device’s use in the Las Vegas shooting, demand has run high, with Slide Fire announcing on their website that they were suspending new orders until they caught up. They have also removed the list of retailers from their site– a move noted by the Brady group.

In a legal analysis of the litigation, firearms attorney Adam Kraut noted the Protection in Lawful Commerce of Arms Act may shield Slide Fire as they are a Type 07 Federal Firearms License holder, which puts them into the definition of a Manufacturer under the PLCAA.

“The Slide Fire stocks are qualified products (being that they are ‘a component part of a firearm’). So, it would naturally follow that the PLCAA would apply,” says Kraut.

The protection, signed into law in 2005 by President George W. Bush, has been legal kryptonite to the Brady group in the past, with a 2015 lawsuit filed against online retailers over the ammunition sold to James Holmes, used to shoot up a movie theater in Aurora, Colorado, bounced out of federal court– leaving the claimants on the hook for $203,000 in legal fees.

The suit proposes that Slide Fire pay for psychological and medical monitoring for all the attendees of the festival– which are estimated more than 22,000– as well as punitive damages.