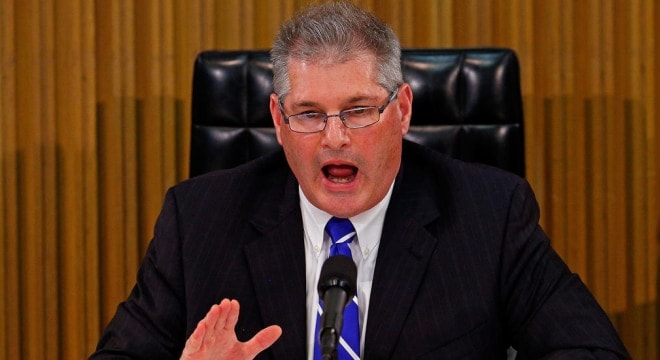 With only three Republicans voting against the measure Wednesday, an expansive proposal to outlaw bump stocks and other devices swept the Massachusetts House.

Proposed by state Rep. David Linsky, a Natick Democrat, the proposal passed as an amendment to an appropriations bill with little debate on the now-controversial firearm accessories that have become a political football since their use in a mass shooting in Las Vegas earlier this month.

“These devices have one purpose, and one purpose only – to kill and to wound as many people as possible in a short period of time,” said Linsky in a statement. “They have no place in civilized society, and today in the Massachusetts House, we took an important step towards strengthening our state’s gun laws and maintaining the safety of our Commonwealth.”

Linksy’s amendment, first floated earlier this week, would direct the state Secretary of Public Safety to draft regulations by 2018 that would bar the use on any rifle, shotgun or firearm of a device capable of increasing the rate of fire. With no provision for grandfathering, those found guilty of possession of such devices would face between three and 20 years in prison.

The National Rifle Association cautioned Linsky’s ban is sweeping in its context and cautions that federal regulators are already reviewing the devices, which may eliminate any need for a legislative fix.

“This broad language could be easily interpreted to ban match grade triggers, ergonomic enhancements, recoil reducing weights, muzzle brakes, and other modifications that countless law-abiding gun owners utilize in order to make their firearms more user-friendly and suitable for self-defense, competition, hunting, and even adapting to physical disability,” says an alert issued Wednesday by the group’s lobbying arm.  “Many of these modifications simply make it easier to deliver accurate and controlled shots with less physical discomfort for the shooter without fundamentally changing the mechanics of how a firearm operates.”

The bill now proceeds to the Massachusetts Senate where Democrats hold a 34-6 majority and can take up the bill as early as Thursday. Republican Gov. Charlie Baker last week said he would sign anti-bump stock legislation “tomorrow” if it was presented to him.

Similar legislation is underway at the state level in Illinois, Ohio, and Washington while at least three federal bills have been filed on Capitol Hill.