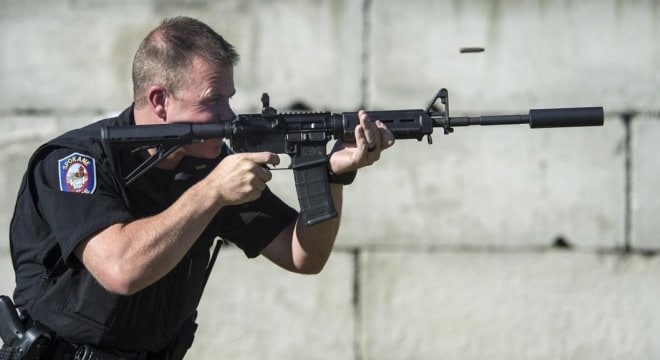 Spokane police are moving to equip all their ARs with suppressors after workers comp claims for hearing loss because of gunfire (Photo: Dan Pelle/The Spokesman-Review)

Spokane officers will soon see their patrol rifles outfitted with Gemtech suppressors to help protect hearing when used in emergencies, The Spokesman-Review reported.

The move came to insulate the city against legal costs of worker’s compensation claims and potential lawsuits from bystanders who may suffer permanent damage to their hearing if the rifles are used. Five officers in recent years have filed claims with the Washington Department of Labor and Industries for hearing loss as a result of gunfire.

“Probably the best way to say it, beyond suppressors, is this is an OSHA-approved noise reduction device,” Lt. Rob Boothe, range master and lead firearms instructor for the department, told the Review.

Last month the City Council signed off on the $115,000 budget request to purchase 181 Gemtech Patrolman suppressors for the agency’s AR-15 rifles. While the agency’s tactical team has used suppressors for several years, the new policy will equip patrol rifles used by the city’s rank and file officers.

“If an officer deploys their patrol rifle in an interior location such as a house, school, or a mall, the officer and the public around the officer can suffer catastrophic and irreversible hearing damage,” says the background of the proposal submitted to the Council. “Placing a sound and pressure reduction device, more commonly known as a suppressor, on the rifles will bring the volume and pressure of the rifle to OSHA-approved safe sound levels without adding significant weight or length to the rifle platform.”

Gun rights leaders in the state welcomed the news but pointed out the same concerns that lead Spokane to adopt the devices are much the same as for civilian users — to preserve hearing.

“This is exactly why gun owners want to own and use them,” Alan Gottlieb, founder of the Redmond-based Second Amendment Foundation, told Guns.com. “It is time to get rid of all the excessive rules, regulations and outrageous federal tax on them.”

Besides the suppressors, the agency’s Strategic Plan outlines other technology acquisitions including the purchase of 20 40mm less-lethal impact munitions launchers and that all officers receive rifle-fire rated plate carriers, as well as medical kits with tourniquets and blood clotting supplies in each vehicle.