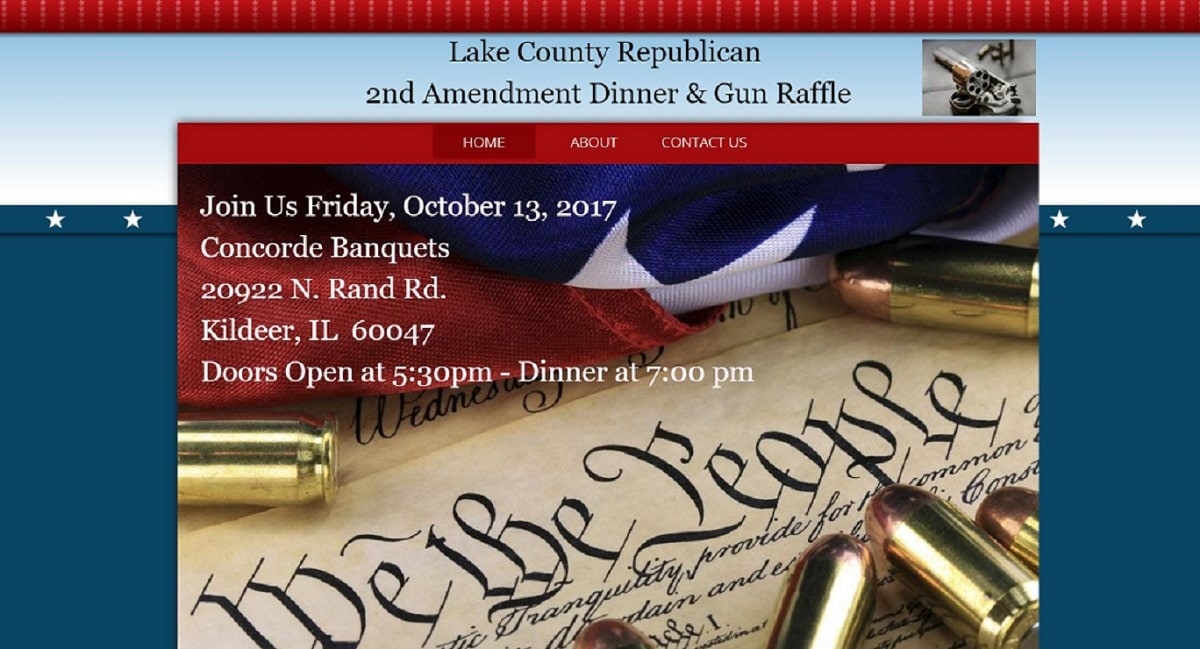 Lake County Republicans are holding a fundraiser Friday in which at least a dozen firearms will be raffled off to donors, with some criticizing the event’s organizers for moving forward after the worst mass shooting in modern U.S. history occurred earlier this month.

The 2nd Amendment Dinner and Gun Raffle will be held in the northwest Chicago suburb of Kildeer on Friday. An AR-15-style rifle will be given to those who fork over $2,000 for the event, while 12-gauge shotguns, 9mm handguns and other firearms will also be given away for lesser donations.

According to the organization’s website, the fundraiser’s mission goes as follows: “To protect and preserve America’s freedoms — foremost among these the 2nd Amendment — the affirmation of an individual’s God-given right to keep and bear arms. Our own personal self-defense, recreational sporting activities, and, of course, the necessary means to resist tyranny are among the reasons we so highly cherish this right.”

Organizer Mark Shaw, the Lake County GOP chairman, told the Chicago Tribune the event had been planned for quite some time and they would still be moving forward despite the Oct. 1 Las Vegas shooting that left 58 people dead and nearly 500 others wounded.

“Unfortunately, obviously, the tragic events in Las Vegas happened and the fact that we had a dinner scheduled for the 13th of October, that’s been something that’s been in the works for over a year,” Shaw said.

Shaw also noted that a portion of the funds raised at the dinner would be donated to the Las Vegas Law Enforcement Assistance Fund, an organization that helps the families of police officers killed on duty. That decision was purposefully made after the shooting.

Larry Falbe, president of the Lake County Republican Federation, agreed with Shaw that the dinner should move forward despite recent events.

“I would think that canceling the event would suggest there’s something wrong or something to be ashamed of for having this kind of dinner that is supporting people who believe very strongly in the 2nd Amendment,” said Falbe.

However, not everyone thought the dinner should move forward as planned. State Sen. Terry Link, of Waukegan, told the Tribune he thought it should be cancelled out of respect for the victims in Las Vegas.

“Only the right-wing Republicans would be having something like this at this time. If you truly believe in the 2nd Amendment and that it was a terrible situation in Las Vegas, you probably could easily cancel something and nobody would think bad of you,” Link said.

“I believe in a person’s right to own a gun if they’re a stable individual,” he added. “But a person like this and people like this, you don’t need the kind of apparatus that this guy had on the gun.”

Other Democratic politicians joined in on the criticism, including gubernatorial candidate Chris Kennedy, and a group called Peaceful Communities said they planned on protesting outside the event.

“To advertise it on Facebook, to promote it, to rally their people to a political cause, to run on the issue of violence, promoting that in our community, I think is dead wrong,” Kennedy told NBC News Chicago.

For $75, attendees will get dinner and one gun raffle ticket. In addition to the aforementioned prizes, attendees will have a chance to win one of three Henry .22-caliber rifles with tributes to the 2nd Amendment, military and law enforcement, safes stuffed with either two or three guns, a black powder musket, and a handful of other prizes.