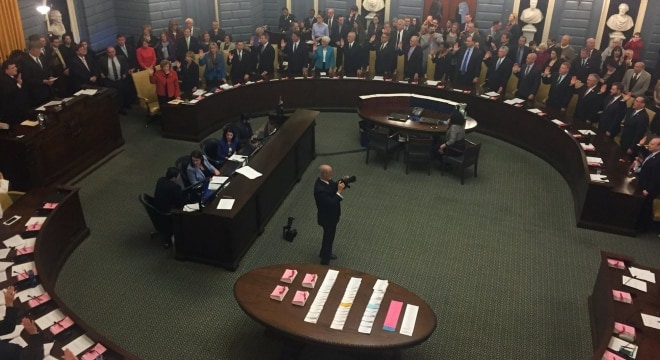 The Massachusetts Senate Chamber of the State House at swearing-in earlier this year. The body passed a prohibition on bump stocks and trigger cranks unanimously on Thursday. (Photo: Mass Sen. Mike Barrett)

The day after being sent a proposed ban on certain gun accessories by the Massachusetts House, lawmakers in the Senate gave the measure a quick thumbs up after some tweaks.

The Senate amendment passed 38-0 Thursday after being reported as a part of H3951. The move aims to prohibit bump stocks and trigger cranks while toning down more sweeping language in the House measure, which intended to ban any device able to increase the rate of fire on semi-automatic guns in the Commonwealth.

State and national gun rights groups urged their members to oppose the original House measure, arguing the proposal is potently vague, leaving open the possibility that it could ban everything from match grade triggers to muzzle brakes.

The modified Senate language adds definitions to state law of “Bump stock” and “Trigger Crank,” regulating each in turn. Further, where those found guilty of possession of such devices would face between three and 20 years in prison under the House proposal, the Senate measure would allow for penalties to run from 18 months to life in prison.

The move in the Senate was backed by Assistant Majority Leader Cynthia S. Creem, a Middlesex Democrat, who described the watered down prohibition with its wider range of sentencing options as “reasonable and balanced” on social media.

Lawmakers now must work out the differences between the two versions passed by the legislature before they can present the ban to Republican Gov. Charlie Baker who has voiced support for outlawing bump stocks.

Similar legislation is underway at the state level in Illinois, Maryland, Ohio, and Washington while at least three federal bills have been filed on Capitol Hill.