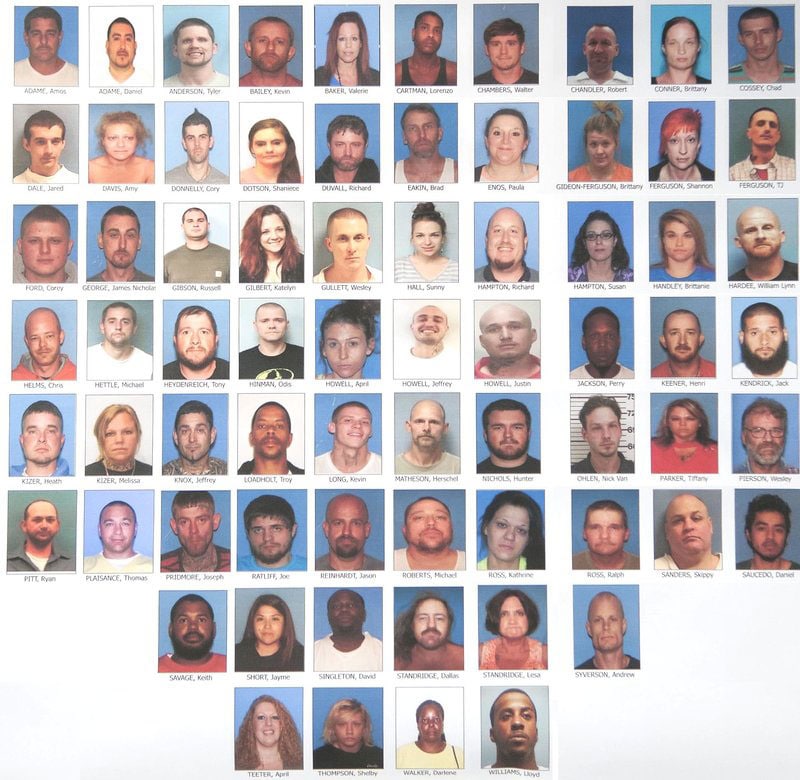 70 defendants were charged in the indictment, but 23 remain fugitives. (Photo: ATF)

Altogether, 70 defendants were named in the indictment, and face numerous charges, including conspiracy to possess with intent to distribute and to distribute meth, distribution of methamphetamine, use of a firearm in relation to a drug trafficking crime, and felon in possession of a firearm. Twenty-three of the defendants remain at large.

The vast majority of those who were arrested Wednesday are convicted felons, many with violent criminal histories.

“Targeting violent, armed drug dealers will be a priority for my office, as well as for all law enforcement agencies in central Arkansas,” said Cody Hiland, United States Attorney for the Eastern District of Arkansas.

Hiland said the collective goal is to get criminals off of the streets and return the communities to the law-abiding citizens. He called Wednesday’s arrests “a victory against these dangerous criminals,” while ATF Asst. Special Agent in Charge McCrary called the criminals a “plague” on the city and surrounding communities.

The arrests came as a result of a nearly two-year-long operation dubbed “To The Dirt,” a name which was taken from the New Aryan Empire belief that membership in the white supremacy group is lifelong or taken “to the dirt.” Among the 44 arrested are nine self-proclaimed white supremacists. However, the operation quickly revealed that, contrary to what was originally believed, the drug trafficking stretched beyond the white supremacist group in the state, prompting the Drug Enforcement Agency and Bureau of Alcohol, Tobacco, Firearms and Explosives to become involved in the investigation.

Authorities then learned hundreds of pounds of methamphetamine had been trafficked from California into Arkansas, where it was distributed in Russellville, the largest city in Pope County, located about 80 miles northwest of Little Rock. Two arrest warrants have been issued for the main suppliers of meth in California, but those individuals – who live in Sacramento and Los Angeles – remain fugitives at this time.

During the operation, which was a collaborative effort between state and federal authorities, undercover officers conducted a total of 59 controlled purchases of methamphetamine, resulting in the seizure of more than 25 pounds of the drug. In addition, authorities seized a total of 69 guns, including 46 during Wednesday’s arrests. Those included handguns, rifles, shotguns, and numerous high-capacity assault-style rifles. Authorities also collected over $70,000 in cash, which is believed to be drug profits, during the operation. A Porsche Carrera, linked to the distribution of meth, was also seized.