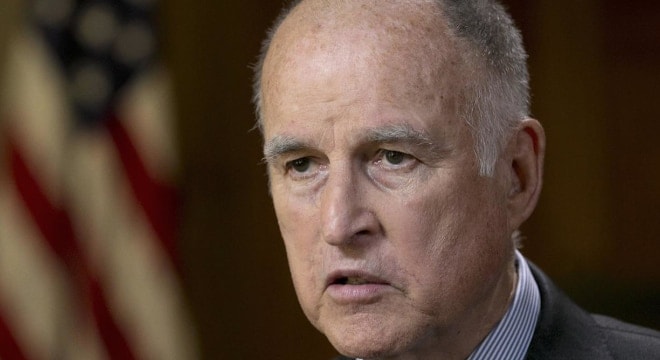 Gov. Jerry Brown gave his approval to three out of four gun control bills on his desk over the weekend (Photo: ABC30 Fresno)

California Gov. Jerry Brown signed measures to end the last narrow allowances in the state for campus carry and open carry but rejected one to mandate increased security at gun stores.

Brown, a Democrat, signed AB 7, AB 424 and AB 1525 over the weekend while returning SB 464 to lawmakers, describing the last measure, aimed at ramping up security measures at gun shops across the state, as an overreach.

“State law already requires that firearms dealers enact security measures to avoid theft,” said Brown in his veto message. “Local jurisdictions can — and have — gone further by adding specific requirements. I believe local authorities are in the best situation to determine if any additional measures are needed in their jurisdictions.”

The bill’s sponsorl, state Sen. Jerry Hill, D-San Mateo, argued the increase in security was needed following incidents where burglars used cars to smash into gun stores across the state. The measure would have required gun stores to keep their firearms in a secure facility with steel bars on windows, deadbolted doors or metal grates over entrances, and an alarm system protecting ventilation in addition to installing exterior features such as concrete bollards.

Gun store owners were against the proposal, arguing it was part of a drive to push already highly-regulated firearm retailers out of business.

“This right here would have most likely put a lot of your favorite dealers out of business,” said Sacramento Black Rifle on social media after news of Brown’s veto spread. “The cost of doing all these crazy ideas would have cost thousands of dollars, and some landlords won’t allow any of it.”

Assembly Bill 424, sponsored by Assembly member Kevin McCarty, D-Sacramento, with the support of the California Federation of Teachers, state PTA, and the National Association of Social Workers as well as a host of gun control advocates, ended the ability for a school district superintendent to give permission to someone to have a firearm on campus.

The move was a follow-up to a general ban on campus carry passed by lawmakers in 2015 in the wake of news that at least four school districts in the state were granting limited exemptions.

“The Legislature and Governor Brown have made sure that no good people with guns will be close enough to stop an evil or insane person in the event of a serious attack,” said Brandon Combs, president of the Firearms Policy Coalition, in a statement.

Assembly member Mike Gipson, D-Carson, backed AB 7 to expand the state’s open carry prohibition to cover shotguns and rifles carried in unincorporated areas. The law makes it is a misdemeanor to openly carry a long gun in a public place where the discharge of a firearm is prohibited in an unincorporated area of a county. Public lands open for hunting and target shooting would not be affected.

“In effect, this bill closes a narrow loophole in California’s existing open carry prohibitions,” Brown said in his signing message.

The third measure signed by the governor, AB 1525, authorizes new warning labels printed to direct those buying a gun to the website of the California Attorney General for information on complying with state firearms laws. Backed by the Brady Campaign, the move is the latest installment of the state’s mandatory gun warning labels which have been standard since 1993.