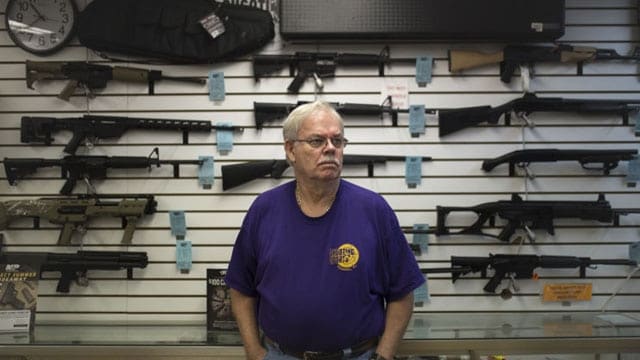 Dealers submitted just over 77,000 applications through the National Instant Criminal Background Check System in September — more than 25,000 less than last year, the biggest on record for gun sales.

Month over month, background check applications in Florida dropped 20 percent between August and September. The numbers echo a market softness felt by gun dealers across the Sunshine State, who — like many others — blame the president.

“Everyone is down right now because a Democrat didn’t win and there wasn’t the panic buying like under the last administration,” Mark Serbu, owner of Serbu Firearms, told the Tampa Bay Times in August. “Gun owners now have an advocate in the White House they didn’t have over the past eight years.”

Marion Hammer, spokeswoman for the NRA’s Florida chapter, reiterated as much to the newspaper, too.

“People tend to purchase things that they are afraid someone is going to take away or keep them from purchasing,” she said. “Now that we have a president who supports all of the Constitution, including the Second Amendment, the gun owners are not as afraid of losing their rights as they were under Obama or any other very liberal antigun Democrat.”

The NRA backed President Donald Trump in May 2016, pumping more than $50 million into his campaign and the down ballot races of other vulnerable Republicans in an effort to protect the balance of the Supreme Court. November’s electoral victory, however, came bittersweet for the gun industry.

Since the November election, stocks for Smith & Wesson and Sturm, Ruger and Co. fell 50 percent and 26 percent, respectively. Both companies blame weak demand, with Smith & Wesson’s CEO predicting as much as a 17 percent decline in annual profits through 2018. Ruger’s second quarter net sales dropped 22 percent and its quarterly earnings fell by almost half compared to 2016.

“While these conditions may be challenging in the short-term they are not new to us,” said James Debney, CEO of American Outdoor Brands, the holding company for Smith & Wesson, in August. “It’s a very dynamic environment right now.”