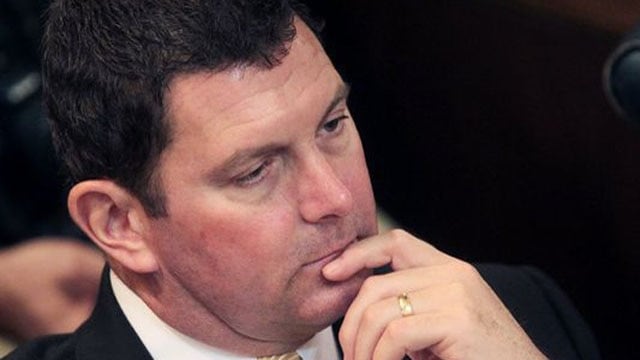 Rep. Jim Lucas — a Republican from Seymour known for his attempts to repeal Indiana’s concealed carry law — said the bill, although not yet introduced, doesn’t cross a line because it trades regulating one constitutional right for another.

“If you’re OK licensing my Second Amendment right, what’s wrong with licensing your First Amendment right?” he said during an interview with the Indianapolis Star last week. “If I was as irresponsible with my handgun as the media has been with their keyboard, I’d probably be in jail.”

The proposal, a near exact copy of Indiana’s concealed handgun law, requires journalists to submit an application and fingerprints to state police, as well as pay a $75 fee for a lifetime license, according to the newspaper. Those with felony convictions, including domestic battery, would be barred from applying.

Lucas, described by the newspaper as “a dogged libertarian who opposes many forms of government licensing and intervention,” remains ambivalent about if he will actually introduce the bill, though free speech advocates say it wouldn’t survive a legal challenge.

“It’s an absolute nonstarter,” said Burt Neuborne, a New York University law professor and a civil liberties expert, during an interview with the Washington Post. “The whole reason for the free press clause was to abolish licensing rules for the press.”

“Maybe we should license state legislators,” he added.

Lucas said, however, he doesn’t want the proposal to become law. He just wants to make his point about gun regulations.