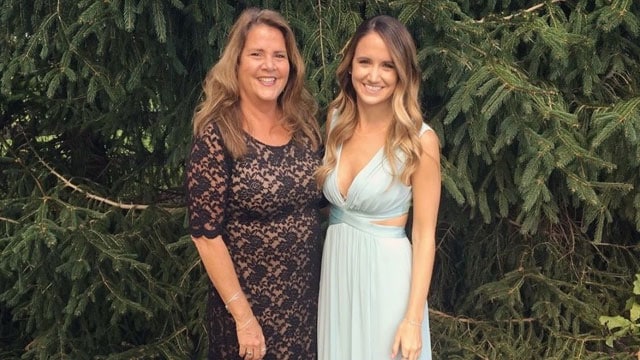 Tina Frost, right, and her mother, Mary Moreland, in Maryland about two weeks before the Las Vegas shooting. (Photo: GoFundMe)

For the first time since the mass shooting in Las Vegas two weeks ago, one of the surviving victims took half a dozen steps with assistance Friday.

Tina Frost, 27, who is originally from Maryland but was living in San Diego at the time of the shooting, was left in a medically induced coma after she was shot in the head above her right eye. Despite an initial grim prognosis, Frost has continued to defy the odds.

“There’s a 90 percent mortality rate for people shot in the head,” said Dr. Keith Blum, one of the neurosurgeons who worked to save Frost’s life after the Oct. 1 shooting. “What you’re hoping for are skull fractures, people who’ve been grazed. High-velocity rifle bullets to the brain aren’t easy to deal with.”

Blum called Frost’s survival “miraculous.” In fact, he said when she first came to the hospital, Frost wasn’t moving any of her extremities. Soon, a specialist made the decision to remove her right eye, as well as a portion of bone from her forehead, to accommodate the swelling from her injuries. Frost’s mother, Mary Moreland, said her daughter will have fragments of the bullet in her brain forever.

Nonetheless, in an update on a GoFundMe page dedicated to raising money for Tina’s medical bills and related expenses, Moreland said her daughter has “had some wins.” Frost previously sat up in bed and moved her arms back and forth during physical therapy sessions, but on Friday, with some assistance, she was able to take three steps away from her bed, then three steps back.

“We are so proud of our Tina, and everyone is amazed at every single movement she makes,” Moreland wrote, adding that Frost is also responsive to those around her and even taps her foot to music when it’s played.

“She sure is a fighter,” Frost’s grandmother, Carlene Printy, told the Las Vegas Review-Journal in a telephone interview.

But both Printy and Moreland also acknowledged that Frost has an amazing network of support. Moreland said there is a great deal of therapy ahead and many more surgeries to come, but they are optimistic about her recovery. In fact, she was transferred to John Hopkins University Sunday after making significant progress over the weekend. Blum said he feels she will be able to talk again once she starts breathing better.

“Things are definitely looking up,”Blum added. “She’s at a great hospital and she’s going to have all the things she’s going to need. She’s at the best place she can be with all the support and her family.”

Frost was among more than the 500 injured when a gunman opened fire from a 32nd-floor window of the Mandalay Bay Casino on an outdoor music festival below attended by about 22,000 people. Fifty-nine people were killed, including the gunman, who authorities say died from a self-inflicted gunshot wound inside his hotel room as law enforcement closed in on him.

The investigation into the shooting continues, but authorities have yet to come up with a motive for what was the country’s deadliest mass shooting in modern history.