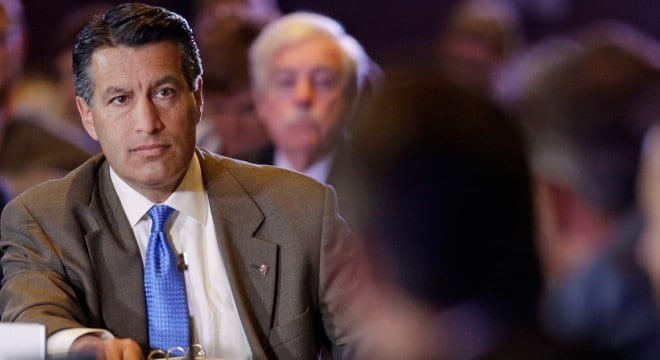 Nevada Gov. Brian Sandoval was named as a defendant along with state Attorney General Adam Laxalt over a sidelined law expanding background checks to virtually all gun transfers. (Photo: AP)

The lawsuit, filed Friday in a Clark County District Court, seeks the courts direct Sandoval to move forward with enacting the tenets of the measure narrowly selected by Nevadans in last year’s general election.

“Passage of the Background Check Act was the culmination of a four-year process, during which proponents of the law were opposed by Governor Sandoval and Attorney General,” says the filing, submitted by attorney Mark E. Ferrario for the firm of Greenberg Traurig. He represents three individuals — Dale Zusi, Vicki DeLaTorre and Sydney Gordon — who worked for the passage of the initiative including marching in demonstrations, working phone banks and participating in door-to-door campaigns.

The referendum backed, Question 1, failed in 16 of the state’s 17 counties with only voters in Clark County approving the measure, in the end passing by around 10,000 votes.

Laxalt pumped the brakes on the measure soon after it was approved after receiving a letter from the Federal Bureau of Investigation explaining the state’s private party background checks are in the purview of Nevada’s own resources as one of the 13 “point of contact” states that conduct its own checks through a central repository. With the federal government declining to process the expanded checks directly, and the Nevada Department of Public Safety neither authorized nor funded by the ballot measure’s language to run the checks, Laxalt contends the law is unenforceable.

The plaintiffs in the lawsuit argue Sandoval can order the state to become a partial-point of contact state for background checks, as others are, which would allow the federal government to process some of the checks and the state others.

However, Laxalt’s office, in an opinion on the matter issued last week, says the type of arraignment Nevadans for Background Checks want doesn’t exist and the state has been rebuffed twice by the FBI when asked about the checks. The only alternative to establish expanded background checks, as painted by the Attorney General, would be to switch all the state’s checks to the FBI, a move Laxalt described as “trading a superior, safe system for an inferior, less comprehensive one.”

Question 1 was funded by a $19.7 million campaign fueled in large part by former New York Mayor Michael Bloomberg through Everytown.

“Every day this law goes unenforced is another day someone can easily get a gun in Nevada with no background check and no questions asked,” said Everytown President John Feinblatt in a statement. “The governor has an obligation to work to implement the law that voters passed, and since he seems unwilling to do his job, we strongly support this effort to obtain a court order requiring him to do so.”