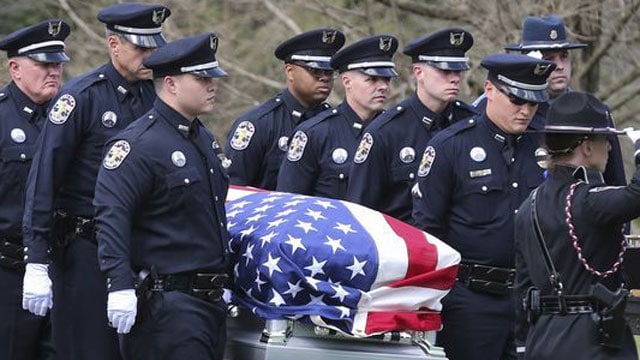 Law enforcement officers carry the casket of Louisville Police Officer Nick Rodman, who died in April from injuries sustained in a car accident while on patrol. (Photo: Courier Journal)

The number of police officers killed in the line of duty increased 37 percent last year, according to FBI data released Monday.

The annual Law Enforcement Officers Killed and Assaulted Report shows that 118 officers were killed in 2016, up from 86 the year before. Last year’s total is comprised of 66 officers killed as a result of felonious acts and another 52 officers died in accidents.

Last year saw 25 more officers killed during the commission of a felony, an increase of 61 percent, the report shows. An analysis of the data shows a slight increase over the past 10 years.

The felonious deaths occurred in 29 states, as well as Puerto Rico, and Texas saw the greatest number of law enforcement deaths in 2016, the data shows. Of the eight officers killed in Texas, five were fatally shot in the same ambush that took place in July during a march in downtown Dallas. Behind Texas, California had five law enforcement deaths, while Georgia, Louisiana, and Tennessee each saw three police officers killed last year.

White males made up the largest demographic for 2016 line-of-duty deaths, while the average age of the slain officers was 40 years old and, on average, officers served around 13 years on the force before they were killed. Ambushes claimed the greatest number of law enforcement lives, followed by disturbance calls, about half of which were domestic disturbances.

Firearms were the most commonly used weapon of choice, and handguns were typically chosen over long arms, but four officers were killed when a vehicle was used as a weapon. Of the 59 individuals accused of killing police officers, the overwhelming majority – 45 – had prior criminal histories, and more than a dozen were under judicial supervision when the killings occurred.

About half of the accidental deaths for 2016 were the result of vehicular accidents. The demographics were comparable to those of felonious deaths.