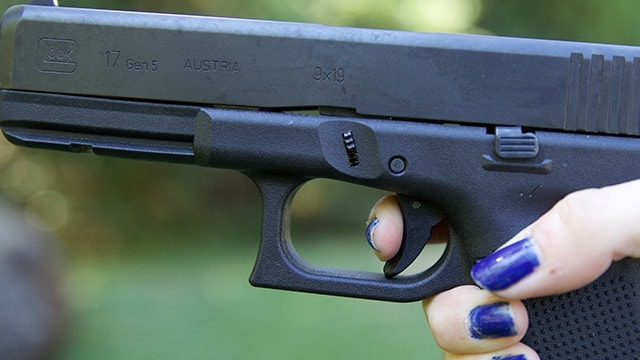 The arrival of the Glock Gen 5 saw improvements over the famed company’s previous generations. Most notably, the overhaul of the plastic fantastic’s trigger assembly. Though the company’s upgrades were music to the ears of buyers who prefer to buy stock, the introduction had some wondering is Glock trying to muscle out aftermarket competition?

The Glock 17 and 19 Gen 5s came as no surprise, but its trigger upgrade did. The all-new series features a completely redesigned spring assembly that compresses rather than stretches. In addition the company revamped the trigger mechanism housing on top of modifying the trigger pin to work alongside the new ambidextrous slide stop. The bottom of the trigger is also re-contoured and the trigger bar has been adjusted to work alongside a new trigger spring.

The result of all this work equates to a crisper, more responsive trigger package. While the upgrades improved on previous designs, it also made swapping out individual parts a little tougher and largely prevented the use of Gen 4 aftermarket parts. The inability to easily swap out individual pieces immediately caused some in the industry to question the aftermarket effects of the trigger face-lift.

Though aftermarket companies admit that the Gen 5 does make minor improvements, they say it’s not enough to push gun consumers away from fine-tuning their polymer pistols.

“We bought a Gen 5 pistol. Didn’t see that much improvement in the functionality of the trigger,” CMC Triggers President Jack R. Beigel told Guns.com in an email. “Our trigger looks so much different than OEM and it’s so much more comfortable than the OEM trigger, that by itself is compelling enough for sales to remain strong.”

Apex Tactical, who just announced the upcoming release of its Gen 5 trigger kit, said consumers will never turn their backs on the opportunity to kit out their guns.

“The first is that consumers of aftermarket parts are always looking for ways to improve and personalize their firearms. These consumers believe that the pistol, or rifle or shotgun, can always me made better with upgrade parts that are designed to improve the firearm,” Paul Erhardt, director of marketing for Apex Tactical, told Guns.com. “The second is that while Glock has improved the trigger, that improvement is not on a par with the performance of an Apex trigger. Customers looking for a better, crisper trigger pull will seek out aftermarket trigger makers.”

Though the notorious gun maker has remained mum on whether the Gen 5 directly or inadvertently targets the aftermarket industry, retailers say they don’t feel Glock has any ill feelings towards its booming aftermarket.

“Glock, like the other major manufacturers, knows that the aftermarket helps drive the primary market,” Erhardt said. “Glock wants customers to buy their pistols. Whether or not those consumers keep the pistol stock is irrelevant — beyond the obvious issue of making the gun unsafe.”

Since the August release, accessory makers have worked diligently to work around Glock’s new design and offer their own take on parts. Apex is set to release its Gen 5 trigger kit and parts Oct. 16, while other manufacturers say their upgrades are on the way.

“We’ve already had many customers calling for Pyramid Trigger Systems for their Gen 5 guns,” GlockStore CEO and Founder Lenny Magill told Guns.com in an email. Magill says due to demand, Glock Store will be releasing new models on their Pyramid Trigger line to accommodate the new Glocks.  “We have prototyped the trigger to fit and function in Gen 5 models for both our Original design and the new FLAT Face Pyramid Trigger. We will be shipping in late October.”

Jeff Wilson of GlockTriggers.com said the company is also currently working towards offering trigger models for the Gen. 5 soon.

“Customers are already contacting us regarding trigger upgrades for Gen 5. Parts are not available yet,” Wilson told Guns.com. “Most everything we currently sell will be available for the Gen 5.”

Though CMC Triggers didn’t elaborate on its plans to offer Gen 5 parts, the company did confirm that trigger kits compatible with new Glocks are in the works.

While there’s no definite answer on whether Glock sought to tamper with aftermarket parts, it doesn’t appear that retailers are worried. If anything, they are confident in the promise that consumers are never satisfied with ordinary.