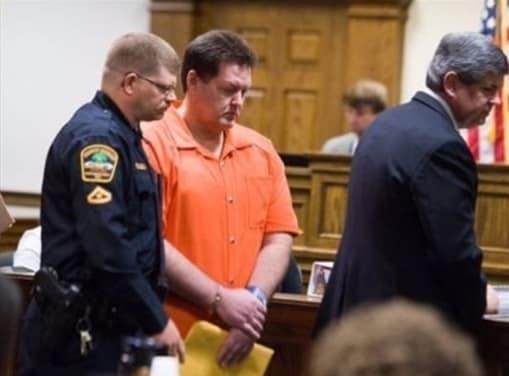 The accused gun supplier,Dustan Lawson, faces 36 charges, according to the 18-paged indictment filed last week. The charges include making false statements to the gun stores where he bought the firearms and transferring the guns to Kohlhepp.

The indictment shows the gun purchases and transfers to Kohlhepp occurred between October 2012 and July 2016. Multiple guns, firearms accessories and suppressors were transferred to Kohlhepp during that period. Though Kohlhepp had not yet been convicted of murder at that time, he was a convicted sex offender prohibited from owning firearms.

Kohlhepp is now serving seven consecutive life sentences for a number of murders, WLTX19 reported. He pleaded guilty in May to kidnapping Kala Brown and fatally shooting her boyfriend, Charles David Carver. The couple disappeared from their Anderson apartment in August 2016.

The serial killer also pleaded guilty to the murder of Spartanburg husband and wife Meagan Coxie and Johnny Joe Coxie. They disappeared in December 2015, and their remains were found on Kohlhepp’s property.

Kohlhepp also confessed last year to the 2003 Superbike Motorsports murders in Chesnee, which had gone unsolved for over a decade. During the shooting, he murdered workers Scott Ponder, Beverly Guy, Brian Lucas and Chris Sherbert.

When speaking to Spartanburg County Sheriff’s Office investigators on Nov. 6, 2016, Kohlhepp mentioned Lawson by name and told police Lawson had bought the guns for him. Once he had the firearms is his possession, the killer told investigators he “modified the hell out of them,” using instructions he found on the internet.

Lawson is scheduled to be arraigned Monday, Oct. 16, at the federal courthouse in Greenville.