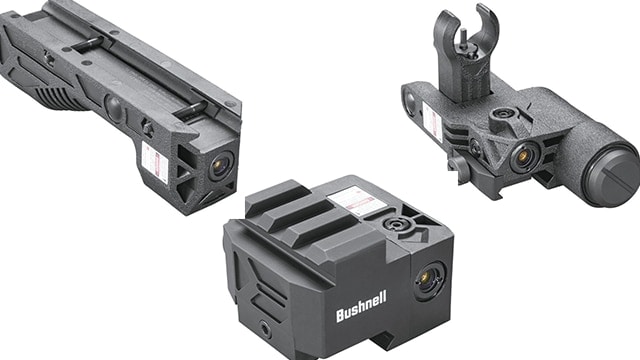 This isn’t Bushnell’s first foray into the world of AR optics. The company says its AR Optics line is already “the category leader for MSRs.” New for 2017, however, the manufacturer introduced three new models featuring a purpose-built laser sight with advanced features alongside high performance output.

The Haste is both waterproof and ergonomic, ready for use on MSRs to include AR pistols. The forward-grip laser is available in red or green options and mounts under the bore. The Chase boasts two sights in one. Users push a button for a bright, continuous red or green laser beam or flip-up the post for a physical sight.

The Chase also mounts under the bore, allowing for accurate transition between targets. Rounding out the series is the Rush, a hi-rise optics mount with built in laser for close quarter engagements. The integrated, offset laser saves space while the red or green laser offers a powerful beam at the push of a button. The Rush replaces standard optics mount and is compatible with Picatinny rail mounted optics.

“More and more MSR users are finding the benefits of laser sighting systems impossible to ignore,” said AR Optics line manager Bryan Parrish said in a press release. “Our engineers worked tirelessly to advance these systems, with innovative designs purpose-built for the rifle platform. With high-output lasers and easy one-button, constant-on operation, the Haste, Chase and Rush outperform the competition and offer users a better way to make the shot.”

No word yet on an official MSRP for the new models.