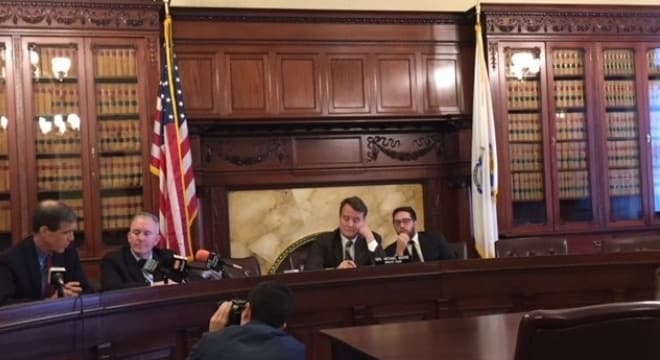 Legislators outnumbered speakers at a hearing on bump stocks in Massachusetts on Wednesday. (Photo: Shira Schoenberg/The Republican via MassLive.com)

Although both chambers of the Commonwealth’s legislature have already passed a ban on bump stock devices, lawmakers held the first public hearing on the subject on Wednesday.

Berthiaume, one of just three lawmakers to vote against the sweeping House version of the prohibition last week, said he “never heard of a bump stock ever or trigger crank, and I’ve been shooting since I was a little kid” but was not inclined to support his chamber’s bill to ban them as he felt it was too vague.

That bill would bar the use on any rifle, shotgun or firearm of a device capable of increasing the rate of fire — a broad net that gun rights advocates argued could be interpreted to ensnare any number of gun accessories far beyond bump stocks. With no provision for grandfathering, those found guilty of possession of such devices would face between three and 20 years in prison.

The Senate version, which Berthiaume said he does back, sets more rigid definitions of “Bump stock” and “Trigger Crank,” regulating each in turn.

The Gun Owners’ Action League, the state’s National Rifle Association affiliate, said in a statement they do not support any legislative action on the devices but did credit the Senate version of the bill as stopping the “runaway train” of the robust House proposal which “granted unbridled regulatory authority to the Commonwealth over all firearms maintenance, enhancements, and modifications.”

Jim Wallace, head of the gun rights group, explained to media he chose not to speak at the hearing this week because there was no point in “testifying about something that has already happened.”

Lawmakers now must work out the differences between the two versions passed by the legislature before they can present the ban to Republican Gov. Charlie Baker who said he would sign anti-bump stock legislation “tomorrow” should it be presented to him.

Similar legislation is underway at the state level in Illinois, Maryland, Ohio, Rhode Island, Tennessee and Washington while at least three federal bills have been filed on Capitol Hill.