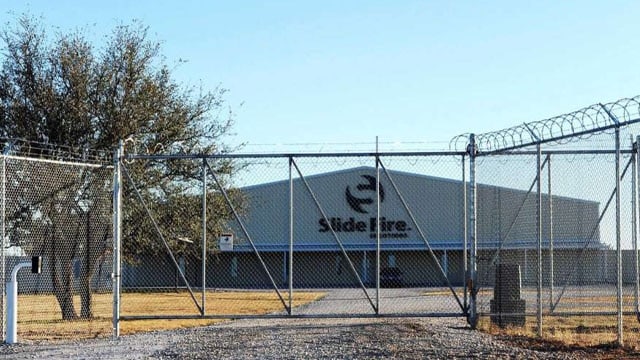 Slide Fire Solutions is headquartered in the tiny central Texas town of Moran. The 270-strong community told the New York Times this week they are standing behind the company and its founder, Air Force veteran Jeremiah Cottle. (Photo: Joy Lewis/Abilene Reporter-News)

The residents of the tiny town in central Texas where Slide Fire Solutions manufactures its now infamous bump stocks say they are standing behind the company and its founder, Jeremiah Cottle, according to a report from the New York Times.

Moran, Texas, sits 150 miles west of Dallas off State Highway 6. Less than 300 people call the town home and most of them consider Slide Fire Solutions an economic blessing.

Jeremiah Cottle, an Air Force veteran, opened Slide Fire Solutions in Moran in 2010, generating $10 million in sales in its first year. It’s signature product, the bump stock, soared from obscurity into the national spotlight three weeks ago when federal investigators revealed a dozen of the devices were found in the Las Vegas shooter’s hotel room at Mandalay Bay Resort and Casino. Public fervor for a ban reached fever pitch earlier this month when a bipartisan coalition of lawmakers introduced legislation outlawing the devices.

“It’s being used as a scapegoat — they’re looking for somebody to blame,” Lanham Martin, a Shackelford County commissioner who lives in Moran, told the newspaper. “Guns don’t kill people. Slide Fire stocks don’t kill people. It could have been just as lethal, if not more so, with a good scope.”

Slide Fire halted new orders in the days after the nation’s deadliest mass shooting claimed the lives of 59 people and wounded more than 500 others. Cottle has yet to speak out publicly about the tragedy or respond to a pending class action lawsuit blaming his product for the incident.

“Everyone out there thinks we’re killers, and that’s very far from the truth,” Steven Taggart, the town’s mayor, told the newspaper. “They’re trying to tear us down, and saying that we’re evil. That is heartbreaking. That’s what tears me up, that they think we’re bad people.”

Residents said banning bump stocks would provide a devastating blow to the community, which boasts no stoplights, no gas stations and just one retailer — a liquor store. Dozens of jobs would be lost.

“Jeremiah is absolutely sick over it, but we’ve come together to say, ‘No matter what happens, we’re here for you,’” said Jeff Martin, a longtime resident of Moran. “Moran is just a spot on the map. Slide Fire brought a lot of stuff back into the community. They helped a lot of people.”