Report: Use of force ‘necessary’ in congressional baseball attack 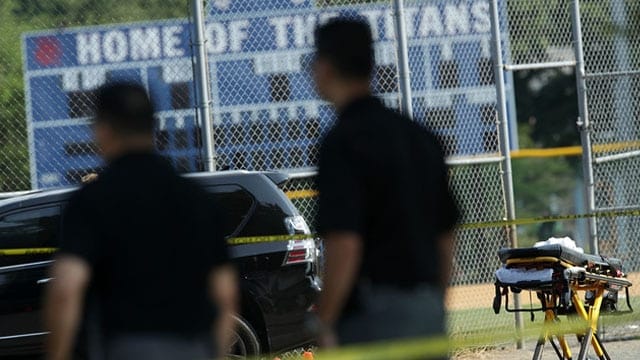 A use of force report released earlier this month by a prosecutor in Alexandria, Virginia found that officers fired at least 40 rounds to stop the shooter’s attack at a congressional baseball practice in June.

Alexandria Commonwealth Attorney Bryan Porter concluded in his 41-page report that “it was reasonable – indeed it was necessary – for (the officers) to use deadly force in order to repel the assault and neutralize the threat.”

“The facts presented in this case are so clear-cut and so obviously required the agents and officers to use deadly force that one might question why my office even conducted this review,” Porter wrote. “The answer is self-evident: the facts cannot be considered ‘clear-cut’ until their totality is known and sufficiently analyzed.”

On the morning of June 14, the 66-year-old shooter approached Simpson Field as a group of Republican congressional baseball players practiced for a charity event.

“About 20 to 25 people were practicing on Simpson Field, taking batting practice and shagging flies,” the report says. “Representative Steven Scalise (R-La.), the House Majority Whip, was playing the field near second base.”

“(Special Agent) Bailey saw Rep. Scalise fall to the ground after being struck by a bullet and he ran onto the field to go to the Congressman’s aid; however, he began taking gunfire as he entered the field, hearing bullets go past his head,” the report says.

Three Alexandria police officers arrived on the scene, and two of them opened fire on the shooter. Officer Alexander Jensen fired three rounds from a Bushmaster Model XM15-E2S semi-automatic rifle, two of which hit the gunman.

“The agents and officers reasonably used deadly force until the threat was neutralized, and then, to their credit, they immediately approached the suspect and rendered first-aid,” the report says.

The gunman fired 70 rounds, 62 of them from an SKS-style semi-automatic rifle. After he was hit in the hip by a bullet, he dropped the rifle and fired eight rounds from a handgun before he was subdued. Within 10 minutes of the initial shots, the gunman was handcuffed and officers administered first aid. He later died from his injuries. In the end, Porter found the agents and officers acted appropriately, and saved lives.

“The agents and officers are the paradigm of what law-enforcement officers should be and are true stewards of the public trust inherent in their respective offices,” Porter wrote. “This case did not present a close call. To the contrary, not only were the actions of the agents and officers reasonable, they were obligatory in light of the overwhelming and determined force employed by the suspect.”