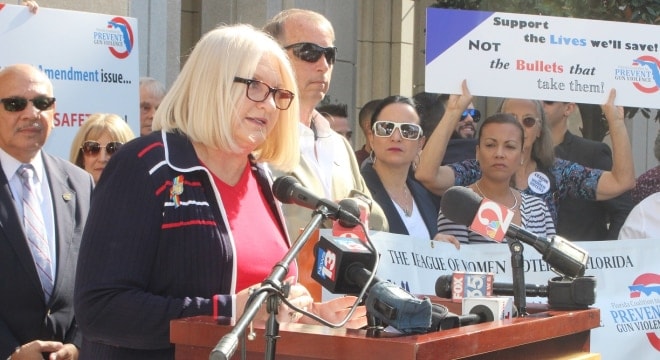 State Sen. Linda Stewart and other Democrats in the legislature are backing a number of proposals to increase gun regulations on Floridians. (Photo: Florida Politics)

Democrats in the Florida legislature have introduced several measures in recent days aimed at ramping up gun control in the state.

The bills proposed would prohibit the sale or transfer of an “assault weapon,” bump stocks, or “large-capacity magazines” as well as establish protection orders to remove guns from those though at-risk and require mental health checks for concealed carry permit applicants. Those backing the measures say the recent mass shooting in Las Vegas that left 59 dead is a call to action.

“We have a responsibility to act. There is no legitimate reason whatsoever to own these weapons of mass murder,” said state Sen. Linda Stewart, an Orlando area Democrat. “We’re not taking anybody’s guns away and we’re not infringing on anybody’s right to hunt or to protect themselves. We need to start getting control of the things we can by enacting commonsense laws to help prevent what happened at Las Vegas Strip and at Pulse nightclub from being repeated.”

Stewart is backing two measures, SB 196 which would ban most semi-automatic firearms with a fixed or detachable magazine capable of holding 10 or more rounds as well as their ammunition feeding devices, and SB 456 prohibiting the possession or transfer of bump fire stocks and devices capable of increasing the rate of fire of a semi-auto.

“Our Founding Fathers could never have conceived of today’s modern assault weapons,” said Stewart. “Military-style weapons belong on the battlefield, not in general use.”

Companion House measures to the bills are HB 219 and HB 321, respectively.

Arguing that, “It’s a scary time and we shouldn’t live that way and we need to get help for people who need it,” state Sen. Audrey Gibson, a Jacksonville Democrat, has introduced a bill that would establish a method for the courts to order an individual’s guns seized after receiving a petition from their family or law enforcement that they are at-risk.

Her measure, SB 530, and its House companion, H 231, would establish Risk Protection Orders in Florida. These orders would allow that those with a danger of causing personal injury to themselves or others by having a firearm would be prevented from purchasing one and must surrender any in their possession. The temporary orders could last up to 12 months and those subject to them could appeal to have their gun rights restored.

Similar laws have been adopted in California, Oregon, and Washington.

Miami’s Sen. Daphne Campbell has reintroduced legislation, entered as SB 400, requiring a psychological evaluation for those seeking a concealed handgun permit in Florida.

“My bill will require a mental health evaluation to be conducted by a clinical psychologist or psychiatrist,” said Campbell. “Too many times, we’ve seen the tragic consequences of the mentally unstable wielding a gun and the innocent victims who have paid the price for the madness. This is a basic measure to determine the mental stability of those seeking to carry a weapon.”

Under current Florida law, applicants for concealed carry permits need to meet citizenship and age requirements as well as attest that they do not have a “physical infirmity which prevents the safe handling of a weapon or firearm.” The law also bars those who have been committed to a mental institution unless the applicant has a certificate from a licensed psychiatrist that they have not suffered mental illness in the past five years.

If successful, Cambell’s legislation would set a higher bar for civilians than for police and corrections officers in the state. While some departments require mental health screenings as policy, it is not mandated by law.

Traction on any anti-gun bill is likely to be elusive as Florida’s legislature is Republican-heavy and any proposal would have to earn the signature of Gov. Rick Scott, a Second Amendment stalwart.