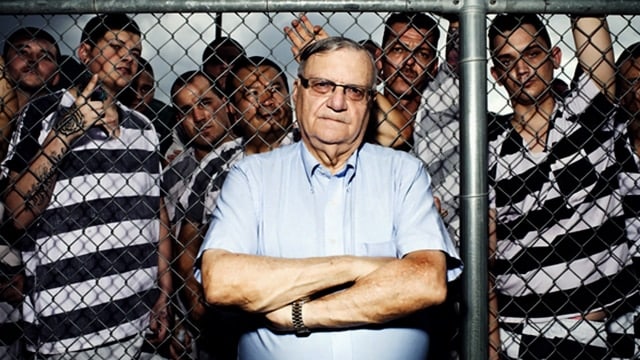 A federal judge on Thursday rejected former Maricopa County Sheriff Joe Arpaio’s bid to have records of his criminal conviction wiped out.

U.S. District Judge Susan Bolton said she dismissed Arpaio’s criminal contempt case after President Donald Trump decided to issue a pardon. But in an order denying Arpaio’s motion to vacate all records of the conviction, Bolton said not even the president can erase facts.

The no-nonsense sheriff was found guilty in late July. Bolton ruled then that Arpaio had exhibited a “flagrant disregard” of a court order that barred him from rounding up undocumented immigrants. In her ruling, Bolton cited as evidence several comments Arpaio had made to the media.

“Why are they going after this Sheriff? Well we know why. Because they don’t like me enforcing illegal immigration law,” Arpaio was quoted as saying in an April 2012 interview with CBS.

After hinting at it during a campaign style rally in August, Trump eventually pardoned the former sheriff. That spared the 85-year-old from up to six months behind bars. But that’s not enough for Arpaio. His lawyers say the pardon entitles him to the erasure of any record of the conviction.

“The President’s pardon moots the case, and it warrants an automatic vacatur of all opinions, judgments, and verdicts related to the criminal charge,” Arpaio’s lawyers wrote in a motion in late August.

Quite the contrary, says Bolton. “The power to pardon is an executive prerogative of mercy, not of judicial record-keeping,” she wrote in her order, citing a previous court case.

Jack Wilenchik, one of Arpaio’s attorneys, told Capitol Media Services that the record of the conviction could be used against the former sheriff in future cases. “We’re not asking to undo facts,” he said.

“We’re not asking for expungement,” he continued. “There’s no such thing in federal law.”

Wilenchik said the pardon functions as if someone had died prior to sentencing or before having a chance to appeal. “The whole case gets undone,” he said.

Bolton disagrees. “Indeed, a pardon ‘carries an imputation of guilt; acceptance a confession of it,’” she wrote, citing earlier court precedent.

“The Court found Defendant guilty of criminal contempt,” Bolton wrote. “The President issued the pardon. Defendant accepted. The pardon undoubtedly spared Defendant from any punishment that might otherwise have been imposed. It did not, however, ‘revise the historical facts’ of this case.”

Arpaio’s lawyers have already filed paperwork to appeal the decision.

“It’s not going to be dropped,” Arpaio said.