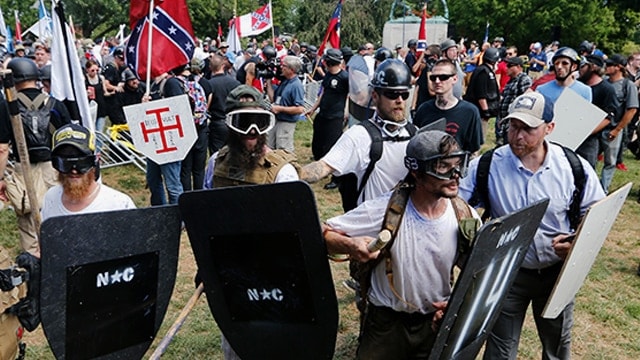 A lawsuit filed last week seeks to prevent seven militia groups, four white nationalist groups, and organizers of the Aug. 12 “Unite the Right” event from going back to Charlottesville.

Citing a section of the Virginia Declaration of Rights of 1776, lawyers with Georgetown Law’s Institute for Constitutional Advocacy and Protection filed a 79-page complaint alleging that private militias and alt-right groups “engaged in highly coordinated and unlawful paramilitary activity that transformed the city into a virtual combat zone.”

“In all cases the military should be under strict subordination to, and governed by, the civil power,” says Article I, Section 13 of the Virginia Constitution, the section cited by the attorneys in their complaint.

“A section of the Virginia Code is dedicated to prohibiting ‘unlawful paramilitary activity,’ as specified therein,” the complaint says. “And another state statute forbids falsely assuming the functions of any peace officer or law-enforcement officer.”

The “Unite the Right” event was organized to protest the planned removal of a statue of Confederate General Robert E. Lee at Emancipation Park, formerly Robert E. Lee Park. Organizers said the rally sought to “unify the right-wing against a totalitarian Communist crackdown, to speak out against displacement level immigration policies in the United States and Europe and to affirm the right of Southerners and white people to organize for their interests just like any other group is able to do, free of persecution.”

But the event quickly devolved into clashes between protestors and counter-protestors, and culminated in a deadly scene wherein 20-year-old James Fields allegedly drove his car into a crowd, killing 32-year-old Heather Heyer and injuring nearly two dozen others.

According to the lawsuit, organizers spent a month planning the event, soliciting private militias to attend the rally, holding planning calls, and circulating an instructional document entitled “General Orders.”

“All the while, attendees encouraged one another to ‘prepare for war,’” says a press release announcing the suit.

“These paramilitary organizations and their leaders (the Alt-Right Defendants) wielded their weapons on August 12 not ‘as individuals’ exercising their Second Amendment rights to self- defense, but ‘as members of a fighting force,’” the complaint says.

“Those who came to Charlottesville looking for a fight planned to use paramilitary tactics to provoke violence on the part of counter-protestors and bystanders, then to invoke self-defense as an excuse for the violence they intended all along,” he said.

“Meanwhile, uniformed militiamen toting semi-automatic rifles stood in the streets of Charlottesville. Many of these militiamen carried 60 to 80 pounds of combat gear and surrounded the main protests at Emancipation Park,” says the press release. “Their presence terrified residents of the college town and those seeking to peacefully counter-protest.”

As alt-right leaders promise to return to Charlottesville for further protests, lawyers want to prevent a sequel to Aug. 12.

“We’re asking the court to take these groups at their word, and act swiftly to prohibit their unlawful return to Charlottesville as roving armies,” said Mary McCord, senior litigator for ICAP. “The laws of Virginia and dozens of other states already contain the tools to stop unauthorized and intimidating displays of paramilitary force. With this suit, the Charlottesville community is confronting vigilante violence with an even more powerful weapon: the rule of law.”

Foreseeing objections to the suit, lawyers were sure clarify that they aren’t trying to trample on the Constitution.

“This suit does not seek to restrict the individual Second Amendment right to arm oneself for self-defense,” says the complaint. “Nor would it imperil Defendants’ First Amendment rights to peaceably assemble and express their political views, however abhorrent they might be to others. Instead, it aims to restore the longstanding public-private equilibrium disrupted by Defendants’ unlawful paramilitary conduct.”

A grassroots defense fund has formed for the defendants in the case. T-shirts are also being sold to help raise funds.

“Show your Support for the Charlottesville 32 brave men and women that stood for everyone’s 1st amendment rights,” says a blurb on the page selling the shirts. “Attack [sic] by those they protected and now being sued by the city of Charlottesville VA. This lawsuit is ONLY about the government taken control of the people and putting the power strictly in the hands of the government.”