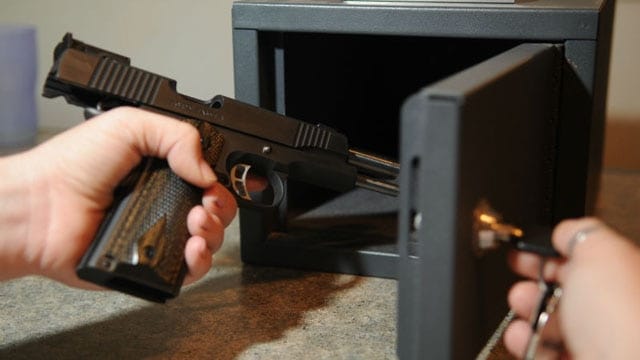 A government study published this week concluded safe storage programs sometimes work — and sometimes make no difference — when it comes to preventing gun-related injuries and deaths.

The Government Office of Accountability studied 16 different nonprofit or publicly-funded safe storage programs — including the National Shooting Sports Foundation’s Project ChildSafe, Bulletproof Kids and the New Hampshire Firearm Safety Coalition — as well as a compilation of research regarding effectiveness of some of these initiatives at the request of congressional Democrats on the Senate Health, Education, Labor and Pensions Committee.

The agency says in its 51-page report research regarding these programs is scarce, but the few data sets available suggest programs that hand out free locking devices appear to encourage safer storage practices among gun owners. Discussing these issues with the family physician, however, produces mixed results.

The Centers for Disease Control recorded over 6,900 gun-related injuries and 1,500 deaths in 2015 for children and teens under the age of 18. Across all age groups, suicide accounted for 61 percent of the 36,000 gun-related deaths that same year. Despite this, the GAO estimates more than one quarter of gun owners store their guns loaded and, of those, half leave them unlocked.

“There is so much we can and absolutely should be doing to address gun violence — but as this report makes clear, one simple, critical step is to gain a better understanding of how to encourage the safe storage of guns,” said Democratic Sen. Patty Murray, of Washington, in a press release Wednesday.”I’m hopeful that every senator will take a close look at the findings in this nonpartisan report, and join Democrats, the Brady Campaign, and families nationwide in pushing for stronger investments in gun violence research.”

“From our point of view, education is the key and of the programs that the GAO surveyed, any of them can help somebody learn how to handle their firearms more safely and certainly to store them more carefully,” Dr. Robert Young, editorial director of DRGO, told Guns.com Thursday.  “Good things, all. It almost matters less if you can prove objectively that one or the other is more effective. The more we have this going on, the better.”

Young cautions against legislation mandating safe storage or increasing penalties against those who don’t follow best practices, insisting statutes already exist for negligence, manslaughter and being an accessory to a crime “that would be applied anyway in situations when they seem to fit.”

“We don’t think legislating it as a requirement makes any sense at all because the only way to enforce that would be violations of the Second Amendment and the Fourth Amendment — unreasonable search and seizure –because the only way to enforce it would be to randomly inspect people’s homes,” he said. “It’s ridiculous. You can’t legislate private behavior.”

“But it’s never just about the gun,” he added. “It’s about this whole set of events. The owner, the owner’s decisions, the age, the degree of potential responsibility someone else has in the house, who may or may not belong there, who should or not should have been looking around. There’s more to responsibility than just — did you lock your gun up in one room and the ammunition in another room separately and is it unloaded — there’s more to it.”

When it comes to suicides, however, Young — a practicing psychiatrist — says the issue “goes beyond safe storage.”

“There’s no way a safe storage law will protect an owner from using his own gun to kill himself or herself,” he said. “When there is a situation when I suspect dangerousness on the part of my patient … I want to try to see that the risks are reduced in any way that I can. That certainly can, in my case, include asking family or friends to take custody of firearms, knives, ropes, drugs, whatever I think might be a potential risk of use for harm. On rare occasions, I’ll ask the police to help out, but it will never happen without my patient knowing and understanding it and it’s voluntary to any degree possible.”