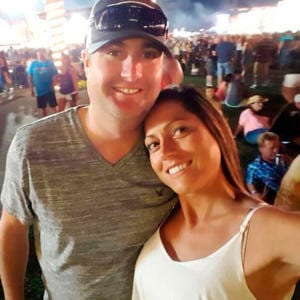 A Las Vegas shooting survivor has started a fund for the first responders who came to help during the deadliest mass shooting in modern U.S. history.

The survivor, 38-year-old Chad Robertson, created the Las Vegas First Responder Thank You Fund to try and raise $100,000 in order to make 1,000 gift baskets for the first responders affected by the shooting, including police officers, firefighters, and nurses.

Robertson, a native of Farmington, New Mexico and the son of former Farmington Deputy Fire Chief Phil Robertson, told the Farmington Daily Times that he believed it was important to recognize all those who ran into harm’s way in order to try and help during the shooting, in which 58 people were killed and hundreds more injured.

“Those guys are victims as well,” Robertson said in a phone interview. “They’ll have a hard time going through things.”

The night of the shooting, Chad was at the Route 91 Harvest Festival with his wife Jennifer, standing 60 to 70 feet from the stage where country music star Jason Aldean was performing. When the first shots were fired, Chad initially thought they were fireworks until Aldean ran off stage.

The couple then ran way from the stage, caught up in the crowd as another wave of gunfire came down upon them. “We just saw people getting shot,” Chad Robertson said. “As we were running, we saw people get hit.”

The couple briefly thought the shooter was somewhere within the festival and so laid on the ground, pretending to be dead. They then got to their feet and ran toward the northern edge of the festival, where they hid behind a hot dog cart and generator.

The Robertsons then bolted for the festival entrance and were able to make it across the street to the Tropicana, where they hid until early in the morning when police removed the lockdown.

After returning home to Northglenn, Colorado, Chad started working on a way to give back to the first repsonders who helped during the attack.

He then met up with Melody Mesmer, co-founder of non-profit group Foundation 1023, which provides wellness and mental health services for first responders. The foundation is now handling the financial operations for the fund.