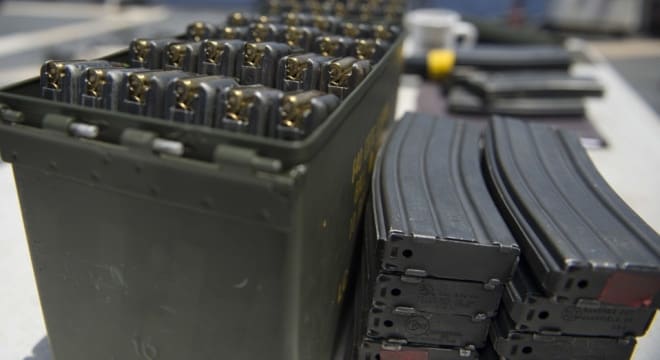 A prohibition on pre-ban detachable magazines capable of holding 10 or more rounds set to become active earlier this year in California but has been put on hold by a federal court. Last week 13 attorneys general told the court they sided with California on the ban. (Photo: DOD)

A group of 12 states and the District of Columbia signed on to support a California prohibition on magazines capable of holding 10 or more cartridges.

In response to a federal lawsuit by several California residents in conjunction with the state’s National Rifle Association affiliate who argue the state’s prohibition against “high-capacity magazines” violates their Second Amendment rights, Washington D.C. Attorney General Karl A. Racine and attorneys general from a dozen other states are siding with California.

“The Supreme Court has been clear that the Second Amendment is not a blank check allowing the use of any kind of gun at any time or in any fashion,” Racine said in a statement from his office. “States like California are within their rights to enact reasonable gun laws, and courts shouldn’t overrule sensible, evidence-based policy decisions that enhance public safety and can save lives.”

In 2000, California passed a ban on such magazines but still allowed those already in circulation to remain grandfathered. Last year, Gov. Jerry Brown signed a measure making possession of even legacy “pre-ban” magazines illegal, sparking the lawsuit filed in May. This led to an injunction against enforcement of the new law pending a decision in the court which was appealed to U.S. 9th Circuit, filed by California Attorney General Xavier Becerra.

Racine, in his 26-page friend of the court brief, contends nothing in the Second Amendment prevents states and the District from enacting gun regulations and the injunction ordered earlier this summer “unnecessarily hobbles California’s ability to enact public safety legislation.”

States signing on to the brief include Connecticut, Delaware, Hawaii, Illinois, Iowa, Maryland, Massachusetts, New York, Oregon, Rhode Island, Virginia, and Washington. Notably, while several of the signatory states do not currently have bans or limits on magazine capacity, the supporters say they agree with California’s stand “not because they necessarily believe that California’s policy approach would be optimal for them, but to underscore that the challenged law represents a policy choice that California is constitutionally free to adopt.”