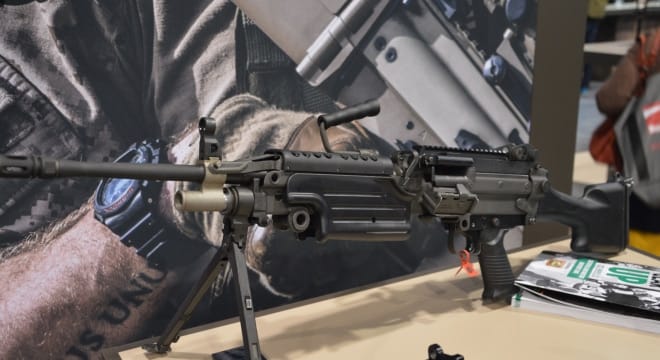 Based on the full-auto FN Minimi squad automatic weapon, the semi-auto-only M249S was introduced to the civilian market in 2015 while a shorter Para model followed earlier this year (Photo: Chris Eger/Guns.com)

FN America issued a recall of the M249S — the civilian version of the military weapon — after identifying an issue with the hammer group for some models that can create an “unsafe firing event.”

In Friday’s announcement, FN cautioned not all M249S serial numbers are affected by the recall and asked owners to check their individual gun against the list of serial numbers in their database. Those targeted in the recall may have a hammer group that, through a design fault, could make their semi-auto belt-fed rifle cease to function due to reset failure.

Those affected should send their rifle back to FN with the aid of a FedEx label generated by the company. FN advised they will replace the hammer group for free on returned rifles and ship the M249S back in around three-four weeks.

“We will make every effort to return the product back to customers within 30 days of receipt,” the company said.

Based on the classic full-auto FN Minimi squad automatic weapon, which first hit the scenes in the 1970s, the M249S was introduced to the civilian market in 2015 while a shorter Para model followed earlier this year. FN advised that both models of the $8K+ rifle are potentially affected by the recall.