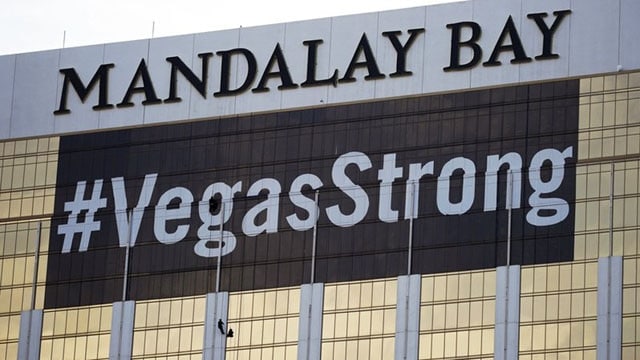 Las Vegas tourism officials temporarily abandoned the city’s famous catchphrase in the aftermath of the deadliest mass shooting in modern U.S. history, according to a report from the Associated Press published over the weekend.

“What happens here, stays here” — the slogan coined by advertising agency R&R Partners in 2002 — disappeared from billboards along the strip as the city still reels from the deaths of 58 people gunned down at a country music festival Oct. 1.

In its place, hotels and casinos display messages of appreciation and support, such as #VegasStrong, “when things get dark, Vegas shines” and “We’ve been there for you during the good times. Thank you for being there for us now.”

Meanwhile, the Las Vegas Convention and Visitors Authority produced an ad featuring social media posts about those who plan to return to the city, tweeting messages such as “NO ONE and NOTHING will stop me from going to Las Vegas” or  “Will be there in 5 days.” It began airing on national cable networks — including ESPN, Fox Sports, Bravo, TNT, The Weather Channel and Travel Channel — last week, catching flak from some who believed it to be “too soon.”

“It’s a little too tacky to continue to promote tourism” Paul A. Argenti, a Dartmouth College professor who specializes in corporate communications, told the Associated Press. “It’s really something for three months down the line.”

Arnie DiGeorge, executive creative director for R&R Partners, pushed back against the criticism, saying the agency “felt it was still important for the town to have a voice.”

“If you look at the social posts out there, there are a lot people saying things just like that,” he said. “That’s a pretty universal statement.”

Authorities still don’t know why the 64-year-old gunman, a retired accountant and frequent gambler, opened fire from the 32nd floor of the Mandalay Bay Resort and Casino that night, killing 58 and wounding more than 500 others gathered on the strip below for the Route 91 Harvest Festival. The shooter killed himself before a SWAT team could enter his hotel room, leaving behind few clues suggesting a possible motive.

“What we know is Stephen Paddock is a man who spent decades acquiring weapons and ammo and living a secret life, much of which will never be fully understood,” Clark County Sheriff Joe Lombardo said earlier this month. “He meticulously planned on the worst domestic attack in United States history.”