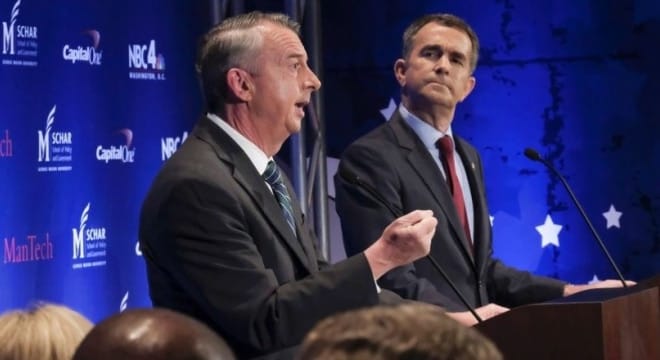 Virginia gubernatorial candidates Ed Gillespie, a Republican, and Lt. Gov. Ralph Northam, a Democrat, are opposites when it comes to their take on gun control.

Facing off in next month’s election, the two candidates have staked out their platform when it comes to the conversation around guns and each has powerful backers who would like to help them turn the rhetoric into action.

Without going into detail on his campaign site, Gillespie promises to “protect an individual’s Constitutional right to keep and bear arms, standing with our Republican-led General Assembly to defend our Second Amendment rights.”

The onetime counselor to President George W. Bush and Republican party lobbyist has the National Rifle Association’s A rating and endorsement along with just over $1 million in campaign assistance. The gun rights group has ads airing on broadcast networks in markets around Virginia contrasting Gillespie with Northam, who the organization has rated with an F.

Northam is campaigning hard on the topic of guns. As outlined in his “gun violence prevention” platform, the Democrat points out that he cast the tie-breaking vote as lieutenant governor to block constitutional carry legislation, would reinstate Virginia’s past one-handgun-a-month policy, and is in favor of more regulation on semi-auto firearms.

“We have to act now with universal background checks, an assault weapons ban and smaller clips,” says Northam, rising to a popular talking point of Gov. Terry McAuliffe’s who has been rebuffed by lawmakers in his agenda to expand gun control during his term.

Northam has the support of the Brady Center, the Coalition to Stop Gun Violence, Everytown — which has invested $1.4 million in Virginia races this year — and Giffords.

“Virginia’s next governor will have an important role in combatting gun violence and advancing solutions to make communities safer and we believe Ralph Northam is exceptionally suited to take on that challenge,” said Capt. Mark Kelly, co-founder of the Giffords group in their endorsement of the candidate.

According to poll aggregator Real Clear Politics, Northam is leading in the latest surveys by about five points. Virginia voters head to the polls Nov. 7.