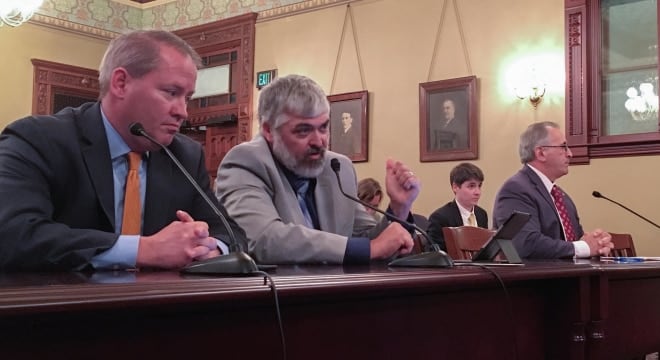 A potentially sweeping new regulation on semi-automatic firearms in Illinois was given the green light by a House panel on Monday, setting it up for a floor vote.

The measure, HB 4117, introduces a definition to Illinois law of a “trigger modification device” which would include any part, or combination of parts, designed or intended to accelerate a gun’s rate of fire without converting it into a machine gun. The Democrat-backed proposal passed the Judiciary Committee 7-5 along party lines.

“The monster responsible for the deaths of so many innocent people in Las Vegas used legal bump stocks to turn his assault rifles into machine guns,” said state Rep. Marty Moylan, a Des Plaines Democrat and sponsor of the bill. “I am angered that radical gun groups are opposing my efforts to outlaw these dangerous devices and choosing profits over the safety of our families.”

Critics of Moylan’s bill argue it goes too far, banning not only now-vilified bump stocks but also just about anything that could improve how a gun fires.

“This bill would essentially outlaw, in our estimation, 50 percent of the firearms (in Illinois),” National Rifle Association lobbyist Todd Vandermyde told lawmakers. “It would make a criminal out of the vast majority of the 2.3 million FOID card holders for mere possession. This may be a response to what took place in Las Vegas, but the net result is criminalizing a lot of (gun owners).”

The Illinois State Rifle Association is reportedly backing a Republican-sponsored bill, HB 4120, which is more narrowly tailored to regulate bump stocks only but that proposal is still in committee.

The move in the Land of Lincoln comes as Massachusetts lawmakers hammer out differences between a prohibition on bump stocks passed by each chamber of their legislature earlier this month. Like the dueling bills in Illinois, one paints a ban with a wide brush while the other targets bump stocks specifically.

Similar legislation is underway at the state level in Florida, Maryland, Ohio, Rhode Island, Tennessee and Washington while at least three federal bills have been filed on Capitol Hill.

Besides the trigger modification language, Moylan’s bill places new regulations in the state on binary target marking compounds, commonly referred to by the brand name Tannerite. Under his plan, they could only be sold to those with a state Firearms Owners Identification card.

“It is ridiculous that any person, including suspected terrorists, can purchase tannerite with zero oversight and I will continue fighting to close this loophole,” said Moylan.