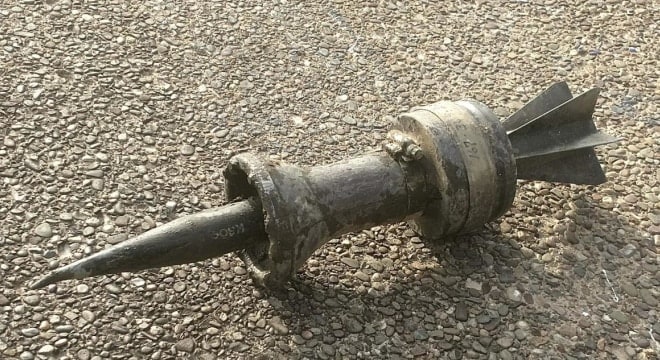 While not extremely common, static displays of APFSDS rounds are available on the civilian market and it should be noted the sabot found is incomplete and the shoe is held on to the dart with a hose clamp. (Photo: Harrisburg Police)

The Pennsylvania State Police Bomb Squad was called out after a jogger flagged down local authorities to show them what they found on a Susquehanna River bank.

The Harrisburg Bureau of Police said in a statement the jogger informed police on Sunday around 1:30 pm there was a strange object in the river bank near the Front Street River Walk at Peffer Street. “Officers identified the object as a possible tank Sabot projectile,” the statement says.

The round, technically an armor-piercing fin-stabilized discarding sabot, or APFSDS, uses a spin-stabilized armor penetrating dart wrapped in a shoe to allow the sub-caliber penetrator to be fired from a larger tank gun or artillery piece. Using kinetic energy and not explosives, the round is typically used as a “silver bullet” by tanks to kill other tanks by penetrating the vehicle’s armor and igniting the contents inside. The dart is typically made of a heavy metal such as tungsten or depleted uranium, though training rounds typically do not use DU.

While not extremely common, NFA-compliant static displays of both APFSDS rounds and their training rounds are available on the civilian market and it should be noted the sabot found is incomplete and the shoe is held on to the dart with a hose clamp.

In the end, the bomb squad collected the device and the area was swept by a K-9 for explosives.

Lt. Col. Angela King-Sweigart, a spokeswoman for the National Guard at Fort Indiantown Gap, told PennLive the round was believed to be part of a 120mm sabot but cautioned the type has not been fired in the area for years. Currently, the M1A1 and M1A2 Abrams, as well as the German Leopard 2 main battle tanks, mount 120mm smoothbore cannons.

Anyone with information on the sabot mystery is asked to contact the Harrisburg Police. If you are curious just how a sabot round works, check out this animation below, complete with footage of an APFSDS in action on a target. Ooof.