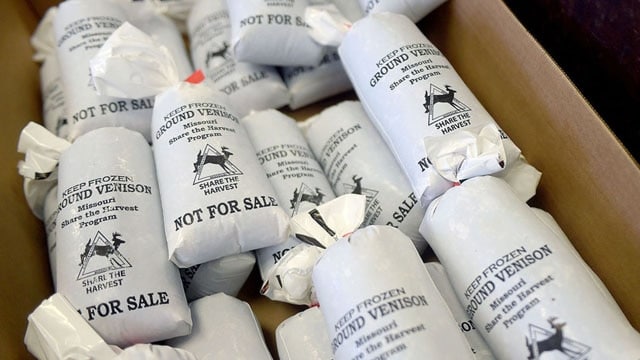 This ground venison was donated by deer hunters and processed at Clarks Custom Meat Co. It will be distributed at Second Harvest Community Food Bank through the Share The Harvest program.
(Photo: Jessica Stewart/ News-Press Now)

State officials in Missouri reminded deer hunters this week to consider donating surplus meat to food banks as part of its annual “Share the Harvest” program.

The Missouri Department of Conservation in partnership with the Conservation Federation of Missouri created the fundraiser in 1992 as a way to feed the state’s most vulnerable populations. Last season, nearly 4,300 hunters donated 198,000 pounds of venison to participating meat processors. The meat was then broken down, packaged and shipped to food banks statewide.

“Hunters started Share the Harvest because they saw a need in their communities,” said MDC Director Sara Pauley in a press release Tuesday. “And hunters remain the driving force behind this popular program that helps feed our fellow Missourians who are in need. We sincerely thank the thousands of deer hunters who support Share the Harvest, along with the many participating meat processors and sponsors.”

“We can do a whole deer and donate the entire deer ground back to Second Harvest,” she said Tuesday. “Hunters are also allowed to bring deer back in for processing and then they can donate any portion of the deer they would like to. We have a lot of hunters that are excited to participate in the program and will specifically go out and hunt for this program knowing that they want to donate a whole deer for it.”

Kristy Miller, spokeswoman for Second Harvest, said the donations through the Share the Harvest program help feed 300 to 400 people a day at the food pantry. Clark’s habit of grinding the meat down proves especially convenient, she said.

“Any protein is good because it is one of the things that’s not donated in abundance and it’s hard to come by and it’s hard for them to purchase, so any protein is good,” she said. “They don’t have a way to freeze or package it or save it (venison) so if we can give it to them where it’s usable quickly, whether it’s ground up meat so they can make spaghetti or lasagna or something simple like that.”