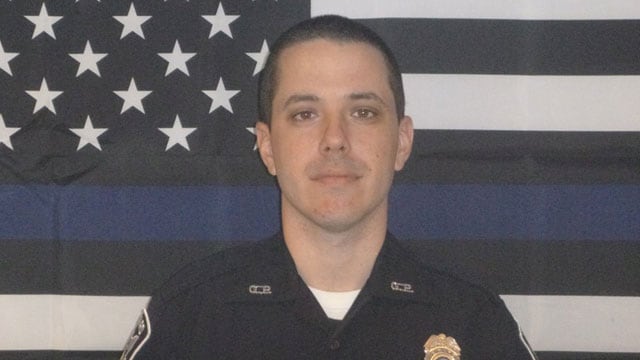 According to Justin Leo’s mother, Pat, he became a police officer because he wanted to make a positive impact in people’s lives. (Photo: Girard Police Department)

A domestic dispute in Girard, Ohio, Saturday night ended with the shooting deaths of a police officer and the man who killed him.

Leo and other officers responded to a call about a domestic disturbance just after 10 p.m. According to reports, the caller said the suspect, Jason Marble, had several firearms, had been drinking all day, and allegedly threatened his girlfriend and her children.

Responding officers approached the home and made contact with Marble. A brief conversation took place, during which time, Marble pulled out a gun and shot Leo. Officers on the scene returned fire, striking Marble, who was pronounced dead at the scene. No one else was believed to be in the home at the time of the shooting.

Arron Wayland, who lives across the street, witnessed the entire incident. “Out of nowhere, one shot rang out, and then immediately, three more shots,” Wayland said.

Other witnesses said they saw crews performing CPR on Leo before he was rushed to the hospital in an ambulance. Despite efforts to save him, he died just before midnight.

Leo’s mother, Pat, said he was always looking to make a positive impact in people’s lives wherever he could. “Justin always said if he could leave somewhere knowing it was in a better situation after he left then when he got there then he felt good, that’s what he wanted to do,” Pat said of her son, an only child.

Girard Mayor Jim Melfi said he knew Leo from the time he was in the first grade because he attended school with Melfi’s daughter. Melfi called him “an absolute gentleman and someone who the city has been proud of.”

The case is being investigated by the Ohio Bureau of Criminal Investigation, and once completed, will be turned over to the Trumbull County prosecutor’s office for review.

Leo was the 109th officer killed in the line of duty so far this year, the 39th by gunfire.