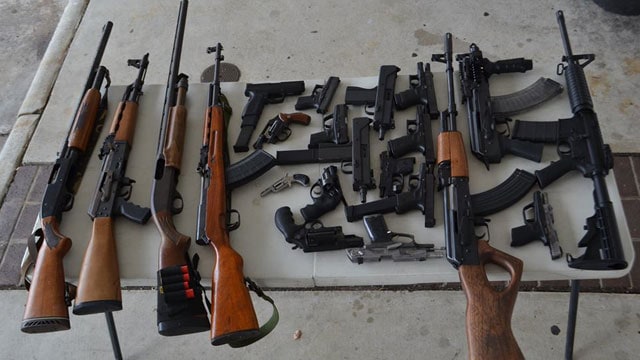 Some of the weapons recovered during a 12-day seep in North Carolina. (Photo: Rocky Mount Police Department)

A 12-day sweep in Rocky Mount, North Carolina, resulted in 13 arrests and the seizure of more than two dozen firearms, the result of an aggressive approach by local law enforcement to cut down on rising gun violence, which they say is related to gang activity.

The Rocky Mount Police Department wrote in a Facebook post Tuesday that many of the weapons seized are believed to have been used in crimes ranging from drug deals to homicide.

“The removal of these weapons won’t completely stop the violence that is occurring in our community but we are confident an impact will be made,” the department added. “The increased efforts by all these committed law enforcement agencies should send a clear message to those who have chosen a gang lifestyle and a gun as their tool.”

Among the weapons recovered were four SKS-style assault rifles, an AR-15, a sawed-off shotgun, and high-powered semi-automatic handguns. Authorities also seized 926 grams of marijuana and drug paraphernalia, as well as nearly $38,000 in cash.